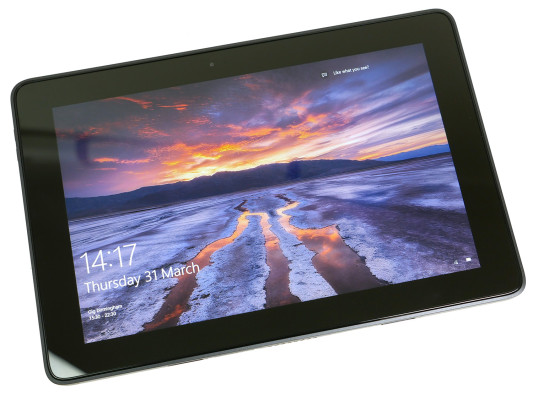 A cheap but capable Windows 10 tablet with good battery life

The Dell Venue 10 Pro 5000 is a simple, no frills Windows 10 tablet range that’s largely aimed at business users but could equally be useful for in the home . Now with updated hardware, the 5056 model I’m looking at here includes the new Intel Atom Z8500 processor, which should improve performance and battery life.

Before I get into what’s on the inside, though, let’s take a look at the outside.

This tablet certainly lives up to its business billing thanks to a utilitarian black and grey design. The back and sides are all plastic but they certainly don’t look cheap and overall it feels well made.

However the rear is actually removable. This is great for easy servicing but does mean the back plate rattles and flexes so it lacks the premium feel of some tablets. Also, it’s not like there are any user upgradeable parts here like a standard format SSD or RAM. It’s just that it will be easy to replace any parts if and when they fail.

Round the front it’s obvious just how much bigger this 10.1in tablet is than an iPad Air. Along with the slightly larger screen, wide bezels run all the way round, making for a tablet that measures 261 x 175 x 12mm. That compares to 240 x 168 by just 6.1mm for the iPad Air 2.

Nonetheless it’s still reasonably comfortable to hold, thanks to nicely rounded corners and it weighing a not too hefty 660g.

What does make it awkward to hold, though, is that it’s meant to be used in landscape rather than portrait. That means its best to hold it in the middle to keep it comfortable, which in turn makes two-handed typing more awkward.

You can of still use the tablet in portrait mode. It’s just not exactly designed for it. 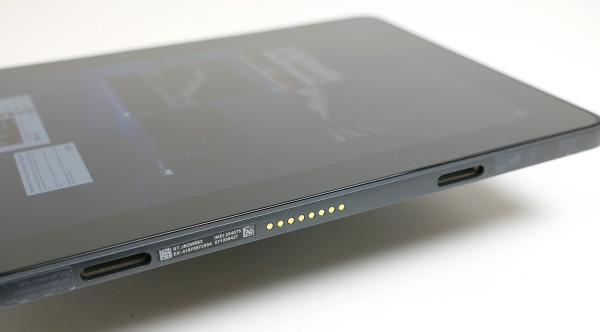 Along that bottom edge are slots and gold contacts for connecting the tablet to an optional folding keyboard dock, but sadly Dell didn’t provide this for review. Likewise Dell’s active stylus wasn’t provided but is compatible with this tablet.

Still, the tablet itself isn’t in need of anything extra when it comes to connectivity. A full-size USB port and a USB Type-C (which also double as the charging port) means you can plug anything from a usb memory stick to a mouse and keyboard into this thing, without the need for adapters.

There’s also a microHDMI for video connections, a microSD slot for storage expansion and a microSIM slot for using this tablet while out and about.

One speaker on each of the short sides makes for stereo sound but the quality is as mediocre as you’d expect. You can hear the stereo effect but overall volume and depth is minimal.

Far more impressive is the screen. With a 1920 x 1200 pixel resolution it’s nice and sharp, and a maximum brightness of 478 nits means it copes even in bright conditions. What’s more contrast is plentiful and colours are rich but reasonably accurate.

Just 65% sRGB coverage and a Delta E of over 5 show it isn’t quite up there with the best but it’s absolutely fine for most users. 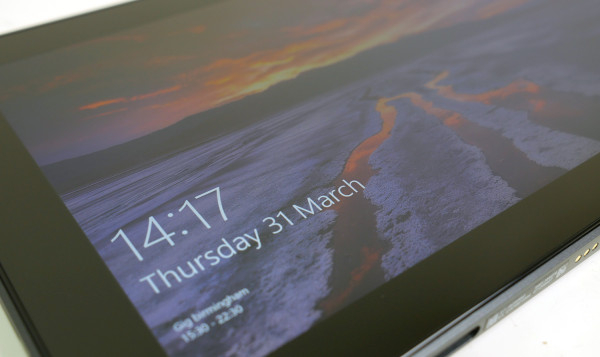 Also fine for many things is that processor. If you’re just pottering about in Windows 10’s tablet mode, just using one program at a time it’s reasonably nippy and copes with graphically rich websites, HD video playback and the like.

However, switch back to Windows 10’s desktop mode and start doing some slightly more hefty multi-tasking and things seriously slow up.

As such I’d advise caution if you’re ever likely to find yourself having to do some serious work on this thing. It simply isn’t fast enough to replace even a modest laptop.

And this touches on the other problem with this and any other Windows 10 tablet, which is that there aren’t enough tablet optimised apps. While the web browser can take care of many duties like watching youtube or checking googlemaps, it can be faster and more intuitive with a dedicated app.

That said, almost because of those limitations this is the first time I’ve settled into actually using a Windows 10 tablet almost exclusively in Tablet mode, only ever dropping to the desktop to transfer some files or access my NAS drive.

It’s not as slick a tablet experience as an iPad or Android tablet but at the end of the day you can do most of the same stuff, it’s nearly as portable and if you do need to fall back on desktop apps it’s there ready and waiting.

And the crucial thing here is that it provides this experience for a long time. So many Windows 10 tablets of the past have provided a reasonable experience but then only delivered six hours battery life. Not so here.

Dell claims 11 hours but in my tests it lasted nearly 8 and a half with light use, and I could certainly see it getting well over 9 if you were really careful.

So if you’re looking for a tablet that will do most of the usual tabletly things – web browsing, email, video, reading PDFs – but want to know that you when the need arises you can do everything you normally do on your home or work PC , then the Dell Venue 10 Pro 5056 may be what you’re looking for. Especially as prices start at just £350.