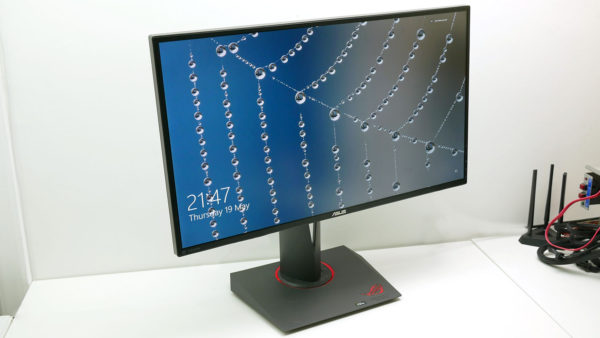 Possibly the best gaming monitor you can buy

The Asus ROG Swift PG279Q is the company’s flagship 27in gaming monitor. Yes it also has a 4K screen at this size but it only runs at 60Hz. This model, though, has a 1440p resolution IPS panel that runs at a blistering 165Hz.

It also packs in G-Sync and all the premium features you’d expect of a flagship model, making it perhaps the finest gaming display you can buy right now.

Kicking things off is the design and build quality. Most obvious are the bling additions of glowing red lights in the stand, but that’s the least of it. The quality of the stand is also a step above, with it feeling solid and stable and offering smooth, easy movements for the various adjustments it offers.

The stand can also be removed and a VESA mount used instead but it’s not a toolless process to remove the panel like on some competitors.

Also marking this out as a top-notch, premium display are the low-profile bezels that give the whole monitor a sleek, modern feel. They’re not quite as tiny as on this monitor’s main rival, the Acer Predator XB271HU, but they still put this display above the vast majority when it comes to looks.

The big limitation with this display, though, is a lack of connectivity. As with most G-Sync displays it only has two inputs, with one DisplayPort and one HDMI. In comparison Freesync alternatives include several HDMI, some DVI and even VGA. That means that if you like to have your monitor as the centre of your gaming and multimedia world you’ll have to get an HDMI switcher to connect all your consoles and other AV devices.

Also, I’m not a fan of the use of an external power supply, which means you have to find somewhere to store the power brick.
You do at least get a headphone out jack plus a couple of USB 3.0 ports. Inside there is also a pair of 2W speakers. They’re nothing special but it’s always useful to have them.

As for setting the display up, it arrives fully assembled, which is always convenient and the onscreen display is excellent. Asus uses a little joystick control on the back of the display to move around the menus and it’s simply the best control system I’ve used.

What’s more this display produces fantastic image quality right out of the box. The default setting is too bright, as ever, but otherwise colour temperature, contrast, colour coverage and Delta E are all superb. Just drop the brightness down a bit and you’re ready to roll.

In contrast many monitors arrive with garish colour modes selected, leaving the user to have to fiddle around trying to guess the best configuration.

Thanks to the use of an IPS LCD panel, rather than a TN panel, viewing angles are also excellent, so you get none of the shifting colours and contrast that plague lesser gaming monitors.

Fire up some games and the combination of the great image quality, the 165Hz refresh rate and G-Sync makes for a fantastic experience. The display response is lightning fast, with no ghosting or smearing, while the G-Sync totally takes care of any tearing or stutter. It really is such a huge step up from both the sluggish feel of 60Hz IPS screens and the poor image quality of TN panels.

Otherwise it’s just the limitations of G-Sync that will be a concern. You get that limited connectivity, and obviously it only works with Nvidia cards plus you’re undeniably paying a premium for the G-Sync brand. Freesync IPS alternatives are nearly £200 cheaper than this display, and although they’re a step down in build quality they offer essentially the same visual experience.

There’s also the Acer Predator XB271HU to consider, which basically offers exactly the same feature set as the Asus, for £50-£100 less. It’s a toss up really as to which you get, but the PG279Q’s far superior OSD controls and slightly nicer design maybe just tip the balance in its favour. Whichever you get, though, you’ll be glad you made the upgrade.