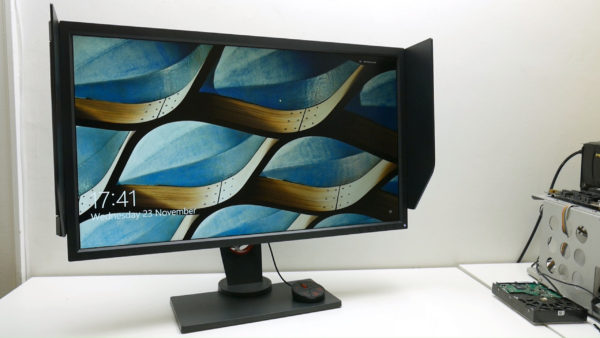 A fantastic gaming monitor but it’s just too pricey

The Zowie XL2735 is BenQ’s new flagship 27in gaming monitor and it features the unique addition of side wings for making sure fellow gamers can’t peak round and see your screen. It’s certainly intriguing, but does that make it a must buy? I’ll get to that shortly.

Elsewhere this is largely a typical 27in gaming monitor. It’s a 2560 x 1440 TN panel that can run at up 144Hz and it includes adaptive sync so works with AMD Freesync.

Because it’s not G-Sync you aren’t limited for connectivity either so you get two HDMI and a DVI as well as the DisplayPort that you’ll need for Freesync.

Styling wise it’s rather utilitarian. The finish is all rough black plastic, aside from a small patch on the back, and you don’t get a nice slim bezel like on the Dell S2716DG.

You do, though, get a fully adjustable stand that includes a couple of moveable markers that help you to remember exactly how you like your monitor setup. It looks and feels like a very niche feature but it could come in handy.

Definitely handy is the, well, handle on top of the stand, you’ll still want to use both mitts to support the monitor fully but it makes it easier to get a firm grip.

The stand can also be removed and a VESA mount used instead.

Like this monitor’s near identical predecessor, the XL2730Z, you also get a wired remote control for navigating the onscreen menus. It works well though how often most people would end up using it I’m not sure.

Conversely, the pop out headphone stand on the side is a bonefide hit. It’s such a simple addition but so useful. Plus you get the headphone and microphone jacks right alongside, plus a couple of USB 3.0 ports. As ever from monitor headphone sockets, the sound quality pales in comparison to a good sound card but it gets the job done.

All of which brings us to the wings. They’re included with the monitor but it’s optional if you add them on. They screw onto the side and can rotate through 180 degrees, so you can tuck them out the way, assuming you’ve nothing plugged in on the left side.

And, they work. So if you’re the owner of a gaming centre or run an eSports event it could be useful. I’m just not sure what use most home gamers would have for them.

All of which would be of little consequence if this monitor was priced right and had good image quality. Sadly it’s neither of those things.

Image quality out of the box is atrocious. The default FPS 1 mode condenses contrast down to just 530:1 and lowers the gamma right down making for a totally washed out image. Great for seeing your enemies in the dark but hardly the best way to show off a brand new monitor.

What’s more it’s not an entirely easy task to find a better option. Switching to the Standard picture mode improves contrast but colour temperature is still far too high and gamma too low.

I ended up having to adjust the gamma option all the way up in the OSD, turn off the image processing, input lag reducing Instant Mode and opting for manual colour temperature adjustment to finally get the picture in check.

After all that’s done it’s okay. You get the usual problems associated with a TN panel, such as poor viewing angles, shimmering block colours and less text clarity than IPS, but it’s not too bad. It just shouldn’t take so much effort to achieve that result. Plus, considering it is a true 8-bit panel, rather than 6-bit, I’d expect it to deliver better than 90.4% sRGB coverage considering the Asus PG278Q manages 100%.

And then there’s the price. Right now it’s selling for £600. That’s absolutely crazy money for this quality of display without G-Sync, which usually adds an extra £100 or so to the price.

For that money you can get the far better PG278Q which includes G-Sync, or the Dell S2716DG is another G-Sync alternative for £500. Heck, you can even get the 144Hz, IPS and Freesync equipped Acer XF270HU for under £400.

As such this BenQ feels completely overpriced right now. Wait until it drops closer to £400 to even consider it.