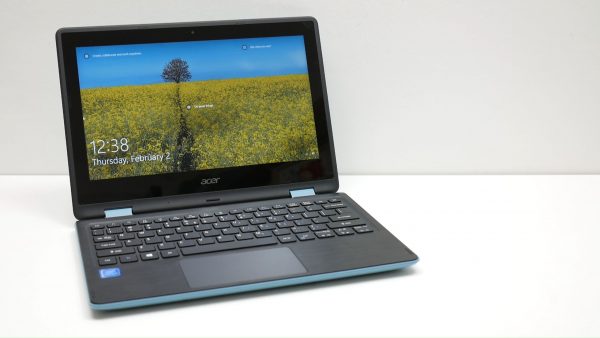 The perfect portable laptop for backpackers

The Acer Spin 1 is a super budget convertible laptop that’s available from just £250 and is ideal for those that want something cheap and versatile but with a decent screen and long battery life.

This laptop is centred around an 11.6inch screen but it’s quite a bit larger than that would suggest. A chunky bezel surrounds the screen making for a laptop that has a similar footprint to some 13in models.

It’s also not all that thin or light for a machine of this screen size. But, the most important thing is that it’s still thin and light enough to be the sort of laptop you could easily carry with you all the time.

It also looks quite nice. The pastel blue plastic exterior is finished with a weave pattern that is rather fetching and should help hide scratches and provide the laptop with a bit of grip. On the inside, the keyboard surround has a faux brushed metal effect to its black plastic, which could easily come across as cheap mimicry but actually kinda works.

Of course, this being a convertible laptop, the display is in fact a touchscreen and it spins round to form a rudimentary tablet, or you can deploy it in a number of creative ways for easy viewing.

And let’s get this out the way straightaway. As a tablet, it’s a pretty poor experience. Windows 10 is not that clever as a tablet OS at the best of times and on a slow device like this it totally pales in comparison to a cheap android tablet.

Instead, it’s the extra versatility such a foldable hinge provides that makes this laptop appealing.

What also helps is that the screen itself is decent quality. It’s an IPS LCD panel so viewing angles are great while a decent contrast level of 874:1 means that, although the likes of the Acer Swift 5 still have quite a lead on it, this laptop doesn’t suffer from the truly awful washed out look that some cheap, low contrast displays have.

What’s more, you get a far higher resolution than you might expect. Typically such cheap laptops have 1366 x 768 pixel screens, but here it’s Full HD. You won’t be using it at full resolution most of the time but when it comes to watching video, viewing pictures or if you just really need to see more of that spreadsheet, then it’s great to have the option there.

As for other aspects of the screen, brightness is a touch low, especially considering the reflective glossy finish, plus its colour temperature certainly could be better, but in use it’s fine most of the time. Similarly the sRGB colour space coverage of 74.4% is not great but entirely adequate and positively good for a laptop of this price.

Another plus is connectivity. You get three USB ports, though admittedly only one of them is USB 3.0, plus an HDMI and although there’s no full-size SD slot you do get a microSD slot so you can just use a microSD to SD adapter in your camera.

Also ranged down the sides are the power and volume buttons plus a headphone jack and lock slot.

So far so good, then, but inevitably that low price does have some downsides. The keyboard, while having a decent overall layout, is not a proper UK one and the key action is quite stiff. As such I found I had to hammer away at the keys quite hard to guarantee pressing them properly, slowing down typing speed and reducing accuracy. You also miss out on backlighting and don’t even get indicators for the lock keys, making it hard to tell if you’ve left the caps lock on.

The trackpad is similarly okay but not exactly the sort of thing you’ll want to be working on for hours each day. Tracking is okay but the click action is again a bit stiff, making it awkward to perform more complex manoeuvres like drag and drop.

The other major problem area is performance. This laptop uses an Intel N4200 processor, which is actually a four core chip but it’s still slow overall. This combined with the 500GB hard drive on this particular version makes for very slow boot and app loading times. Something that isn’t helped by the inevitable free trial of anti-virus software, which I quickly disabled.

You can also get the Spin 1 with a 128GB SSD and a 32GB eMMC solid state storage, the latter of which is also flash memory but more like the slower stuff you get in an SD card than what’s normally used in an SSD. It’s this version that is the cheapest £250 option, with the others demanding upwards of £300.

Whichever version you go for, it’s something of a guarantee that you won’t want to be doing anything too intense on this laptop for any length of time. Web browsing with just a few tabs open, checking email, basic typing, watching video and occasionally tweaking the odd photo will be the order of the day. Anything more than that and you’ll probably want a faster machine.

What makes a lot of this low performance forgivable, though, aside from the low price, is that this laptop last ages on battery power. It managed 9hours and 24mins in my powermark test. So for the intrepid traveller it’s a potentially ideal companion.

Overall, then, if you can afford to spend more then you will get a far, far smoother overall experience, and for those that work for several hours everyday on their laptop I’d probably recommend you do look for something a bit more powerful. But, if you really just need the basics in terms of performance but want a decent screen and the versatility of a touchscreen then the Acer Spin 1 is well worth considering.