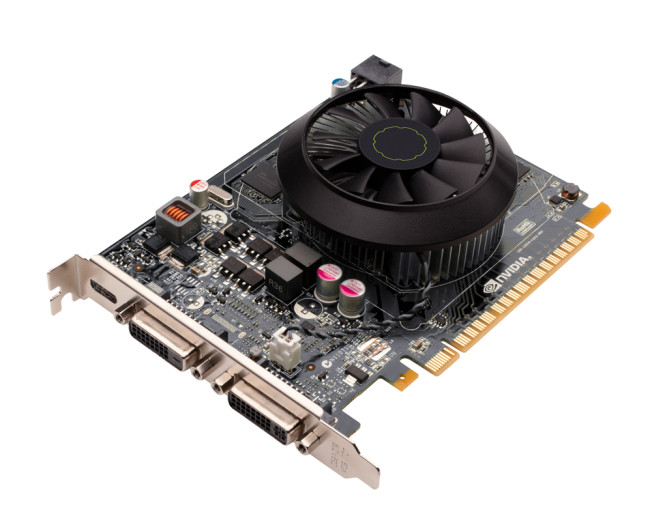 Nvidia has launched the GeForce GT 740 graphics card, a new low-range offering coing in at arond £80.

The new card is centred around a GK107 Kepler graphics processor that includes 384 CUDA cores running at a base clock of 993MHz.

Memory configuration will be dependent upon board partners with both GDDR5 and GDDR3 options available. The former will offer 80GB/s of bandwith on a 5GB/s memory clock while the latter will provide 28.8GB/s bandwidth on a 1.8Gb/s memory clock. Both use a 128-bit memory bus.

Although the card is low power enough to potentially be offered in single slot and even low profile configurations, the first designs are dual-slot.

Nvidia’s reference design also features a central, downward-blowing cooler over the GPU, with the rest of the card left bare. However, most partner variations include a shroud which funnels the air both forward (i.e. back into the case) and back (i.e. out through the IO plate). The shroud also provides an opportunity for board partners to add a bit of branding.

As ever with low-end cards, Nvidia is positioning the GT 740 as a first upgrade from integrated graphics, with the lack of an extra power input being key to its appeal. Exactly what sort of a performance upgrade it will provide isn’t yet clear.

An interesting aspect of the card is that it will be available in a huge variety of configurations, from an entry-level 1GB version right up to a relatively high-end 4GB GDDR5 model with factory overclock.

As such prices do vary considerably depending on manufacturer and specification, not to mention retailer. One of the cheapest we’ve found is a 1GB GDDR5 model from Gainward at Scan for £60.10 including VAT. Pricing for the 4GB editions has not yet been confirmed.