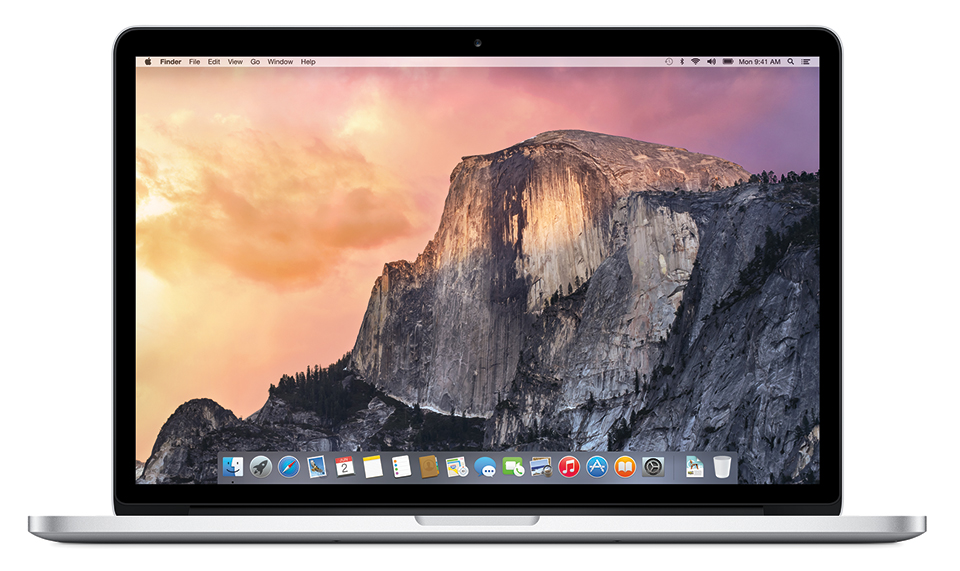 Apple has just unveiled the latest version of desktop operating system, Mac OS X, as well as its mobile operating system iOS 8. The announcements put to bed months of speculation as two what direction the company would be taking its new software. So without further ado here’s what the latest OS X brings to the party.

Apple did initially joked that the new of its OS might be called OS X Oxnard then OS X Weed but finally revealed it would be called OS X Yosemite.This follows version 10.9 Mavericks.

Apple hasn’t yet put a final release date on OS X Yosemite but expect a full public release some time in Autumn (Fall).

Yosemite will be a free upgrade for those users with compatible hardware.

The single most obvious change to the latest version of OS X is to its styling, with the latest version embracing the, somewhat controversial, flat design language of iOS 8. Out are 3D looking gradients and in are ‘levels’ and translucency, just like in the app tray of iOS.

OS X Yosemite Dark Mode
In something of a break from the above design consistency, Apple showed there would also be a ‘dark mode’ style as well as the default lighter look. This isn’t an option available on iOS 8, which some have found a little too garish, so it’s a surprise to see Apple add the option here. The logic would appear to be that with Mac OS X being for serious work, a more muted, less distracting visual style would be much more important.

iOS 8 and Mac OS X Yosemite will work together

While there are a host of new features in both software releases the most standout of both was the new integration of the two. Users will now be able to take phonecalls – yes, regular calls, not just skype – on their Macs, assuming they’re in close proximity.

Handoff is another new feature that allows you to pick-up where you left of. For example, if you’re viewing a page on Safari on your Mac, you can open the same page on your iPad or iPhone by swiping up on the lockscreen.

Potentially further enhancing this interoperability will be that iOS 8 has opened up file access so that apps can more easily exchange information and access core systems. So, for instance, images from the previously locked down Photos app can now be opened in a 3rd party editor and saved back to the same location.

Vastly improved Spotlight search
Apple has gone to town on improving Spotlight search in Mac OS X 10.10 Yosemite. You now get a large, clear search box right in the middle of desktop, rather than just the small box in the top-right corner. This opens up a large number of enhancements.

Introducing iCloud Drive and Mail Drive
Ever since it launched, iCloud has felt strangely limited. If the app you were using supported it then it worked great, but that document was effectively tied to that app. iCloud Drive effectively turns iCloud into something far more akin to Dropbox where files are accessible in Finder for you to open in any app you want.

This also enables another feature called Mail Drive, where Mac OS will send email attachments that are too large for email via iCloud Drive automatically.

Mac OS 10.10 1
Overhauled Safari interface and features
Like the rest of the OS, Apple has given Safari a complete overhaul. It has the new, iOS-like style, and Apple has de-cluttered the toolbar. By default the favourites bar is gone (it can be returned), but instead you can simply search for what you want and your favourites will appear in a dropdown preview pane.

This search box also pulls in more search results, such as Wikipedia results and also potential matching results from Spotlight on your PC. Safari also supports HTML 5 Video Premium, which means you can use services like Netflix without any plug-ins. Apple believes using HTML 5 will improve MacBook Air battery while streaming video by up to two hours.

AirDrop now works between Mac and iOS
Remember AirDrop? It’s that thing that lets you share things quickly between iOS devices, or between Macs. Now you can use it transfer files between iOS and Macs, which is nice, though it should have been there before.