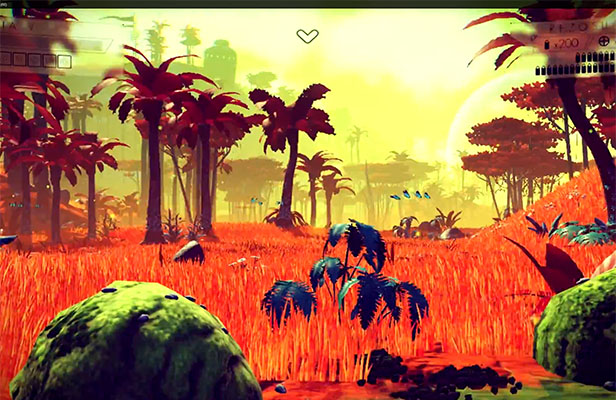 One of the highlights so far of E3 2014 was the reveal of No Man’s Sky, a new Joe Danger creators Hello Games.

The game involves exploring a procedurally generated universe that’s populated by alien life and enemy forces. But what makes it stand out is the highly colourful style and that you can seamlessly transition from walking on the surface of a planet to hopping into your spacecraft and flying out the atmosphere to fight other spacecraft or travel to another planet.

“One of the things we wanted to put across is that No Man’s Sky is a game without limits,” says Hello Games founder Sean Murray. “That mountain in the distance is a real place you can visit. So is that planet. And that star.” Murray says that the time since the game’s initial reveal has seen the team add “hundreds of new procedural systems that have made the universe explode with new alien creatures, amazing geological formations and vegetation patterns, pirates and wingmen.”

No Man’s Sky will launch “console-first” on PS4, though there’s no release date as yet.