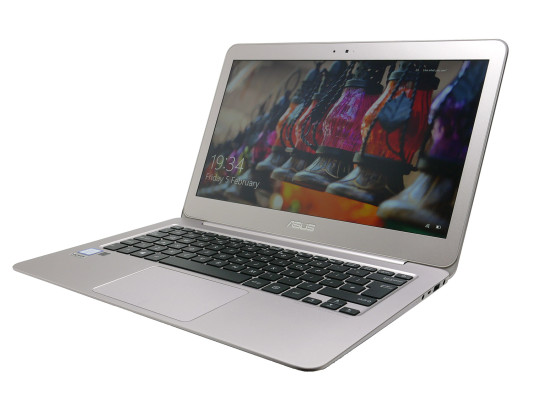 A great value slim and light laptop with one major flaw

This is the Asus Zenbook UX305CA. It’s the updated version of what was almost my favourite laptop of last year, the original UX305.

Like that laptop this one aims to bring the premium look and feel of high-end £1000 ultrabooks to a more affordable level, which in this instance is around £650.

For that you get a sleek metal chassis, long battery life, an Intel Core M processor and a quad-HD IPS screen. It’s a pretty good combination for the money.

Unfortunately, where the UX305 of last year was an absolutely perfect example of how to make a lower-cost ultrabook, the UX305CA has veered off in the wrong direction.

What is still without fault is the thin and light aluminium exterior. Yes, it’s very much like a Macbook Air but I don’t really have a problem with this as I’d much rather see manufacturers create good Windows versions of Apple laptops than have them try to be different for the sake of it and compromise the product because of it.

Unlike the MacBook Air, though, the UX305CA isn’t hewn from solid chunks of aluminium but uses pressed sheets formed over a plastic chassis. This means it isn’t quite as rigid, so if you pick it up by the corner it flexes a little. You really will hardly notice it in normal use but side by side you realise the solidity of the Macbook. Thankfully the UX305CA doesn’t wobble around or flex when you’re typing.

Another thing I really like about the design of this laptop is the way the whole of the bottom is one unbroken sheet of metal. It just looks so much tidier than for instance the bottom of the Toshiba Kira, which has holes for the fan intake.

Instead all the intakes and exhausts on this laptop are housed in the grille that sits in front of the lid hinge, again just like on the Macbook Air.

Taking a closer look at that new quad-HD screen, first impressions are pretty good. It can go nice and bright, viewing angles are good and there’s plenty of punch to colours.

Plus of course you’re getting a whopping 3200 x 1800 pixels, which potentially opens up a wealth of opportunities for using this as a serious work machine.

Unfortunately, there are four problems. One is that Windows still isn’t that great at handling really high resolutions. Obviously at native resolution everything looks really small and if you boost it up there are still quite a few instances where apps or little bits of apps don’t look right.

The second is I just don’t think the high resolution really makes sense for this sort of machine. Yes, Apple did it with the new MacBook but for the most part I think it’s unnecessary, and is of no practical benefit on a slim and light machine where battery life is so important. Doubly so on a machine like this that uses the already quite slow Intel Core M processor.

The third problem is that under test conditions the screen actually performs really badly. My colorimeter measured a contrast of just 403:1. That’s less than half what a typical reasonable quality IPS screen would get, and is normally the sort of level where there’s an obvious greyness to blacks of dullness to whites.

The odd thing is that it’s really not that noticeable in general use. So my advice would be this laptop is fine for more casual use but anyone that finds themselves regularly editing images or video should look elsewhere.

Finally the fourth problem is that the high resolution has a big impact on battery life. Where the original UX305 lasted a class-leading 11hours and 50 minutes on one charge, the UX305CA only manages seven and a half. Now that’s still just about manageable if you’re looking for a laptop that will last a working day but, when there are so many ultrabooks that can do better, it seriously dents this laptops appeal.

All the more so because the whole point of this laptop is that its main compromise is using an Intel Core M processor, which is noticeably slower than a typical ultra-low voltage Core i5 or i7 processor that you’d find in a normal ultrabook.

So if this laptop can’t even offer the awesome battery life you’d expect from using a Core M it’s starting not to make much sense.

At least here the Core M in this machine is of the latest Intel Skylake variety which is quite a bit faster than the previous one that was in the UX305. This means this laptop is absolutely fine for day to day browsing, video watching, checking emails. All that sort of stuff. It’s just when demand starts rising it’ll start to choke considerably sooner that a Core I processor.

Elsewhere this laptop mostly gets it right. You’ve got an adequate 128GB SSD and 4GB of RAM. The keyboard doesn’t have backlighting but is otherwise excellent with a great layout and nice key action. The speakers are also surprisingly powerful. There’s no bass of course but audio is clear and stays distortion free at high volumes.

The trackpad also is okay, with a nice large one-click surface and reasonably accurate tracking. However, the click action is a bit stiff and indistinct and I found the metal surface didn’t allow my fingers to glide across it very easily.

All told then the UX305CA is an okay machine. It still offers good value and for those that would like a high resolution screen and don’t mind the compromise in battery life it’s not a bad buy.

However, I think for most people, sticking with the better quality 1080p screen from last year’s model would’ve been a far better move by Asus. Plus, it really is a bummer Asus hasn’t fixed the slightly iffy trackpad.