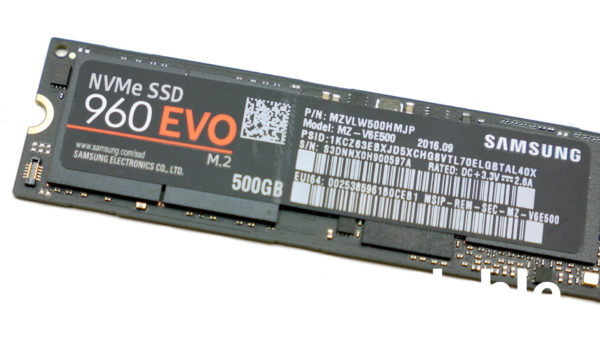 The Samsung 960 Evo is a new range of M.2 SSDs based on similar technology to the company’s flagship 960 Pro drives. Like previous Evo drives, these are the slower, cheaper sibling to the Pro, but unlike previous versions that still makes these among the fastest SSDs you can buy.

That’s because they’re still based on Samsung’s very latest 48-layer V-NAND memory and Polaris controller, plus of course they use the new SSD optimised NVMe standard.

The key difference between these drives and the 960 Pro is that the NAND used here is configured to store three bits of data in each memory cell rather than two. This so called TLC NAND allows Samsung to pack more data into the same space and in turn makes for a cheaper drive. The downside is it’s slower to write to.

To get round this, manufacturers cheat by having a small portion of the NAND run in an SLC, or single-level, mode to allow for fast writes for a short period. If, however, you continue to write to the drive beyond that SLC capacity then write speeds drop dramatically. For the 960 Evo, it drops as low as 300MB/s for the smallest capacity drives.

Thankfully, it shouldn’t be that often that most users find this a limitation as the SLC cache on these drives is plentiful. You get 42GB, 22GB or 13GB depending on which capacity drive you have.

The other disadvantage with TLC is lower longevity. While the 500GB 960 Pro is guaranteed to be error free after a total of 400TB has been written to it, the 500GB 960 Evo is only rated to 200TB of total written data. Plus the Evo only has a three year warranty rather than five. That may sound alarming but the reality is these drives will probably last the average user the best part of ten years, if not more.

As for capacities, you can buy the 960 Evo in 250GB, 500GB and 1TB models, but not 2TB, unlike the 960 Pro. That’s a bit disappointing considering the drive can theoretically pack in more data to each of its NAND modules. But, at least you get a far lower cost of entry, with Samsung charging around £150 for the 250GB drive. In comparison you can’t get a 960 Pro for less than £350.

But enough preamble. Let’s look at some benchmarks.

Firing up CrystalDiskMark, the 500GB 960 Evo immediately shows that Samsung’s sequential speed claims are not exaggerated. Meanwhile, AS SSD never matches maximum quoted speeds due to the way it handles its data, but it’s clear these are still astonishingly fast drives.

However, when it comes to random read and write operations, IOmeter shows Samsung’s numbers are maybe a little generous. For sustained random read I recorded around 270K IOPs, rather than the 330K Samsung claims. Meanwhile random write performance starts off matching the expected 330K IOPs but very quickly drops to around 100K. They’re still impressive numbers overall but there is a clear gulf between these drives and the Pro models.

A problem that affects both drives, though, is the real world impact of all that speed. As I showed in my recent video comparing the 960 Pro to a fairly cheap and slow SATA SSD, game load times are almost totally unaffected by buying a really fast SSD, and sure enough I had the same experience with this drive. Windows boot times are also largely unaffected.

There are some situations where the speed will be felt, whether it’s loading a batch of photos into photoshop, copying large files back and forth or every now and then that extra burst of speed will make the difference between a game stuttering for just a moment and running completely smooth. It just won’t be very often.

What’s more, this is still a fairly expensive drive so if you do only care about having a reasonably fast computer that’ll load games quickly and generally feel responsive, then there’s a strong argument for sticking with an even cheaper SATA SSD and spending the money on capacity rather than speed.

Otherwise, the Samsung 960 Evo is the drive to get right now. The 960 Pro is overkill for most users whereas the Evo strikes a near perfect balance of cutting edge speed and reasonable value.