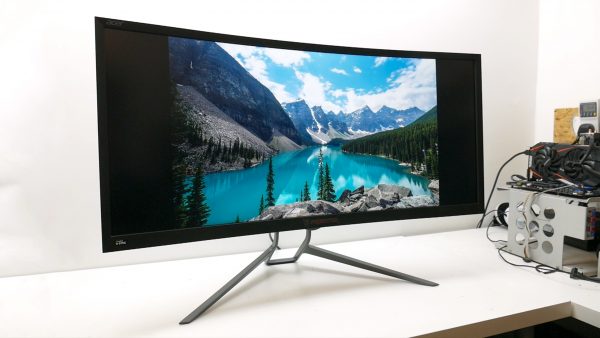 The Acer Predator Z35P is Acer’s latest ultrawide gaming monitor and is a direct rival to AOC’s rather less elegantly named AG352UCG. Both monitors feature 35inch, curved displays that can refresh at up to 100Hz, have a resolution of 3440 x 1440 pixels and they include G-Sync.

The big defining feature of them both, though, is that they use MVA LCD panels rather than IPS so they have an impressive 2000:1 contrast ratio.

It’s quite an imposing feature list, but does it translate into a good monitor.

Well, one area where the Z35P has a clear lead over its main rival is in design. It has slimmer, non-glossy bezels around the screen that make the whole thing look better and reduce annoying reflections. The solid metal stand also looks that bit more striking while round the back the brushed plastic finish and dark metallic red v-shaped sections add a little bit of interest without being over the top.

Notably, though, like the AOC it doesn’t have the narrow bezels of the Acer X34 or Asus PG348Q.

The stand also offers height and rotation adjustment so it’s easy to get the monitor positioned as you like. Alternatively, the stand can be removed and an alternative one used instead.

Round the back you’ll find just two video inputs, as G-Sync is still limited to a maximum of two. So you get one DisplayPort and one HDMI. There’s also a headphone jack but you don’t get a microphone pass through so you’ll have to plug your headset’s microphone directly into your soundcard.

There’s also a USB 3.0 hub, though it’s rather oddly positioned over on the side. All four ports stick straight out the back making it neither particularly convenient to access, nor great for keeping cables tidy.

The final physical feature of note is that you do get speakers, and they’re a step up from the most basic ones you get on cheap displays. However, the sound distinctly feels like it’s coming from the back of the display and lacks any real depth, so even the most basic desktop speakers will be an upgrade.

Setting up the display is a breeze as it arrives fully assembled and there’s very little you’ll need to adjust either. Drop the brightness a bit and you’re good to go.

If you ever do need to adjust anything, though, then you have should have few issues with the OSD. It’s not quite as slick as Asus’ mini joystick controlled OSD but the five buttons line up nicely with what’s on screen and it always feels intuitive to move around.

There’s also a very good selection of options that includes arguably this display’s big final flourish, which is that it can overclock from 100Hz to 120Hz. Except, it really doesn’t make much difference and certainly isn’t enough reason on its own to buy this display.

However, there are plenty of other reasons. Including that the overall picture quality is pretty good.

The deeper black levels of the VA panel are immediately obvious and combined with the huge screen size and 21:9 aspect ratio, they make for an impressive movie watching experience.

The resolution is also a perfect fit, making for a pixel density of 108ppi.

Overall colour accuracy is also impressive, on paper. However, in person, colours feel a bit oversaturated and, just don’t look as natural as on IPS displays. I often find this is the case with VA displays, and was expecting the AG352UCG to suffer from the same problem too. However, it seemed to fare better.

In short, IPS alternatives would still get the nod from me from a pure image quality standpoint.

As for gaming, the 100 or 120Hz definitely feels like an upgrade over 60Hz screens. However, the relatively slow response time of VA means this is no hardcore gaming display. It’s not a blurry mess like some previous VA monitors, but again IPS equivalents just feel a bit snappier.

So, in short, this is a very nice, high-end gaming monitor, and if you do tend to like the colours and general picture quality of VA displays then it’s worth considering. However, even if you do then the AOC AG352UCG is considerably cheaper and is just as good if not better when it comes to image quality. Meanwhile, for most people, the slimmer bezelled design, better overall image quality and slightly more responsive gaming experience means you’d be better off with either the Acer X34 or the Asus PG348Q.