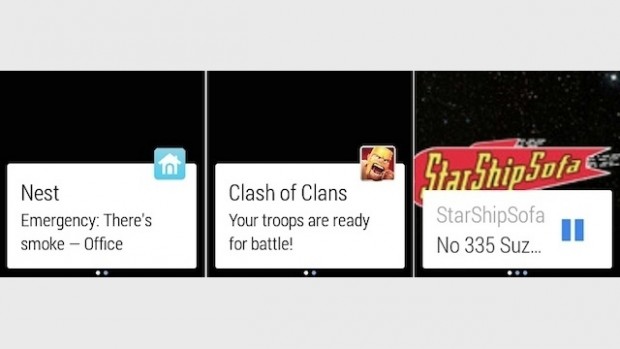 A Google employee has given us as glimpse of what a future Google Android Wear smartwatch interface may look like by revealing some notifications designs.

Employee, Timothy Jordan, shared the notification designs on his Google Plus page, which is now down.

The images reveal notifications from a variety of apps. There’s one from a Nest thermostat warning of smoke having been detected in the office. There’s also one from a Clash of the Clans game declaring ‘Your troops are ready for battle!’ and one for a calendar appointment.

The interface for the music player is also shown, with three swipeable screens showing the track information and a pause button as well as previous and next buttons on the alternate screens.

The designs are as minimalist as we’d expect from Google and certainly look like they would be clear and useful when incorporated into watch.

The first Android Wear smartwatch will be the LG GWatch which has a release date of Q2 2014, meaning we should see if before the end of June.

Also inbound is the Motorola 360, which is picking up interest due to its distinctive circular design. This is tipped for a July release date.