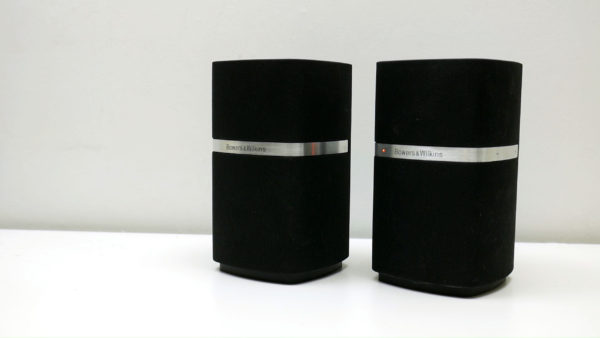 The finest PC speakers you can buy

The Bowers and Wilkins MM-1 have been available for a few years now but this is the first chance I’ve had to use them for a prolonged period of time, and, costing £400, they’re some of the most expensive and most desirable computer speakers you can buy so I had to see how well they held up.

And the quick answer is, very well indeed. Absolutely everything about these speakers is heart-warmingly, joyously brilliant.
It all starts, oddly enough, with their size. Given B&W’s reputation for producing fantastic Hi-Fi speakers and that these speakers are so expensive, it’s kind of a shock to find they’re so small. This makes them so much more practical than many other premium PC speakers or small Hi-Fi speakers.

Then of course there’s the design. The two units are of a distorted cylinder form with a squircle profile. Combined with the full wraparound black speaker cloth this makes for a crisply smart yet also soft and organic look. The subtle brushed aluminium caps on top and strips round the sides and down the back then finish off the premium vibe. And from the top you can see that they’re not thin veneers of metal either but chunky pieces that should stand the test of time.

As for features, on the right speaker the bisecting metal strip incorporates a power indicator, power button and volume controls. The power button also mutes the speakers when pressed momentarily.

Also packed into the right speaker is the amplifier and the inputs for it. On the back is the auxiliary 3.5mm jack input for easily plugging in something like a phone, and there’s a headphone output too. Meanwhile, on the underside is the main 3.5mm input and a digital miniUSB input. Opting for the latter turns these speakers from analogue amplifying units reliant on your sound card for digital to analogue conversion into ones that rely on their own DACs. Choosing this connection method has a couple of advantages.

First is that the MM-1’s DACs are probably better quality than those on your sound card and the whole amplifying circuit will be better tuned to drive these speakers and make them sound their best.

Also, on a rather more practical note, for me at least I’ve found it rather useful that the speakers disappear from the audio devices menu when turned off then switch to being the default when turned on. That means I don’t have to dive into the audio options to switch outputs when I want to change from listening through headphones to speakers.

Also on the underside of the right speaker is the input for the power supply plus there’s the proprietary connection for the left speaker. It’s a shame the cable is tethered to the left speaker, making it impossible to replace a broken cable, but at least the cable is a decent length.

Speaking of servicing and replacement, the bottom can be removed to access some of the wiring but the interior of the speakers is formed from moulded ABS plastic and the outer cloth cover is glued on so overall there’s little you can gain access to. You’ll have to go direct to B&W if you need them servicing.

Inside each speaker you get a 3in woofer and a 1in tweeter, while the right speaker houses an 18W amplifier for each driver.
As a result of all that power coming from the one small speaker, it gets surprisingly hot. It’s nothing to really be concerned about, just don’t place the speakers somewhere that air would be blocked from circulating over the top.

Adding hugely to the convenience of these speakers is the inclusion of a remote. It’s a lovely little thing too. Chrome on the bottom and deeply glossy black on top, it can control power and volume, and has playback controls for if you’re using the USB connection.

All of which brings us to how these speakers sound, and the answer is utterly fantastic. The sheer level of detail they can produce is beyond any other dedicated computer speaker I’ve heard. I’ve lost count of the number of times I’ve been listening to music on these and been able to pick out details I’d never noticed before.

They have power too. Cranked up they’ll easily suffice for small house parties. The lack of a sub woofer means they won’t exactly make the walls shake but they nonetheless have impressive bass power and depth. Certainly they put plenty of cheap 2.1 speaker sets to shame.

All told, if you value clarity but also want warmth and power from your music, these MM-1s are fantastic. And that musical ability translates perfectly to games and movies too.

So, in the end does that really make them worth £400? Well, it depends on your priorities. If you’re mostly just gaming in the evenings or only use your PC occasionally then you may not get enough use out of them to justify it. Or if your PC is in a flat or dorm room and you want more of an all in one speaker set that can really double for party duties and movie night then you may want something with greater overall power.

However, for someone like me that’s really into music and spends several hours every day at their PC, I would absolutely spend the money, if I had it.