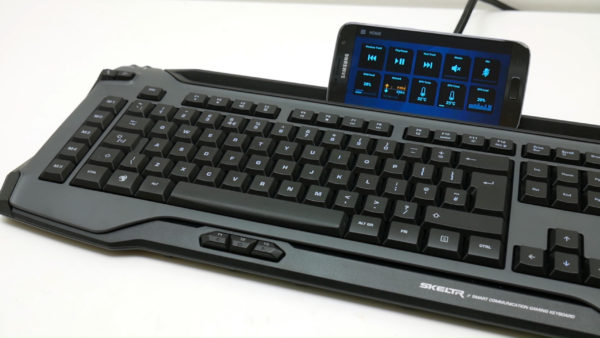 Control your PC with your phone, and vice versa

The Roccat Skeltr is a completely new take on those keyboards that have little screens on them. Instead of using a tiny little poor quality display, you can use the superb quality one on your phone or tablet.

Once hooked up it can be used to see stats about your PC, as well as control functions like volume and music playback.
What’s more you can then use your keyboard to control your phone too, so you can reply to messages mid-game or answer calls with your headset.

It’s a neat idea, and it works surprisingly well. A rubber-lined recess at the back holds your devices securely and you can connect your phone either via WiFi, using Roccat’s Swarm desktop and mobile apps or via Bluetooth.

Via WiFi it’s a simple setup that just requires you to install the software then scan for your PC on the app and away you go. Once setup you can see your computer’s stats and control some basic functions via your phone, such as media playback. You can also customise the home screen adding more monitoring options as well as options for the keyboard itself, such as backlight brightness level.

What really opens up the phone for more useful stuff is connecting via Bluetooth too. Pairing can be triggered by the desktop software then it’s just a case of selecting the Skeltr on your phone.

Now, by hitting this button on the right edge of the keyboard you can use the keyboard to type on your phone. So, if a notification for a message comes in you can tap on it, read it, and write a reply all without exiting your game or picking up your phone.

Connect your headset via the keyboard’s audio ports and, if a call comes in you can answer it via your headset, or you can press this other button to listen to whatever’s playing on your phone.

It’s all genuinely useful stuff. Certainly not essential but as extra features go it beats many of the stuff that’s been added to keyboards over the years.

Plus, you do also get a selection of programmable gaming keys, keys for quickly swapping profiles and round the back there’s a USB pass-through that you can either use to charge your phone or plug in whatever else you might like. It’s also fully backlit but only in zones, with all the keys being one zone and the two side sections each having two.

So there are plenty of extras here, but unfortunately, it’s when it comes to the basics that this keyboard is far less convincing.

There are several problems. The first is the styling. It’s not awful but it’s a far cry from something like the Corsair K70 series. These side bits in particular are rather odd.

Moreover, build quality is decidedly unimpressive. The whole thing is plastic and there’s noticeable flex to it.

And then there’s the fact that it doesn’t have mechanical key switches but rubber dome ones. In terms of feel it’s down to personal preference but certainly mechanical switches last considerably longer and are considered the premium choice.

All of which means that this keyboard’s £150 asking price seems way too high. It feels like a £50 keyboard, with maybe £30 of extra features added on. So I’d expect the total cost to be under £100.

It would be a different matter if those features felt essential but none of them really do.
So, an interesting innovation for gaming keyboards, but maybe not one to invest in just yet.