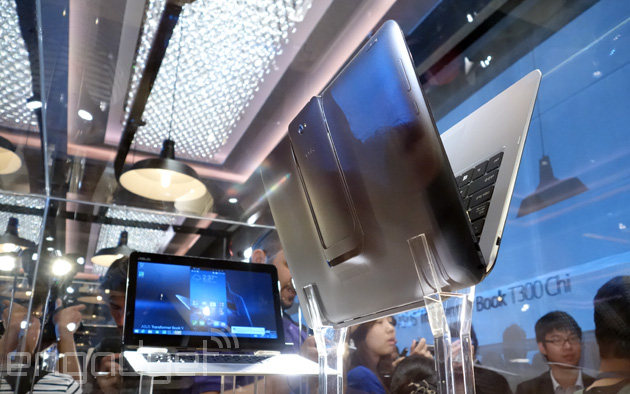 The latter two are made possible by the fact the phone’s Android interface can be displayed fullscreen on the tablet/laptop screen. Alternatively it can show the Android interface in a window on the Window desktop.

Part of the reason all these devices can interoperate so well is that the phone runs on Intel’s 64-bit quad-core Atom (Moorefield) chip, which includes LTE radio.

The device was only being displayed behind a glass cabinet at its unveiling at Computex 2014, so first impressions aren’t yet available. It would also suggest it’ll be quite a while before the Book V will be available.

Other details we do know, though, are that the 0.8kg tablet part comes with a 12.5-inch HD IPS display, 4GB of RAM and a 28Wh battery that claims to offer up to 10 hours of web browsing time. It also has up to 128GB of flash storage, which works alongside a 7mm-thick hard drive of up to 1TB in the battery-less keyboard.

As for the phone, it weighs 140g, is 11mm-thick and incorporates a 2,500mAh battery plus 2GB of RAM, up to 64GB of storage and 8MP/2MP cameras. At the moment, it doesn’t seem like the two operating systems can access each other’s storage space.