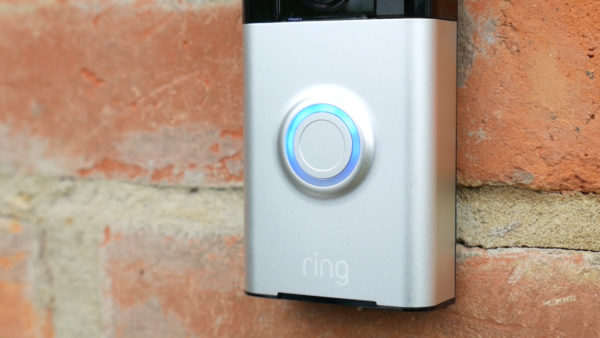 A doorbell, surveillance camera and intercom in one

The Ring Video Doorbell is, pretty much what its name suggests. It’s a surveillance camera and internet connected doorbell all packed into one little unit. It can be used to record video of visitors who’ve pressed the button or have activated its motion detection, plus it can live stream video to your phone so no matter where you are in the world you can see who’s at the door, and you can talk back to them too.

The Ring itself arrives impressively well equipped for installation. As well as the unit itself you get screws, rawl plugs, a spirit level, a double ended screwdriver and even a masonry bit for drilling the mounting holes. None of it’s strictly necessary but it’s nice to see the extra effort.

What’s more, the rest of the setup process is easy too. If you have an existing doorbell you simply swap out the button for the Ring and attach the two wires to provide power, assuming your existing system uses an 8-24V AC power supply. Otherwise you’ll need to install a doorbell transformer.

Alternatively, you can run a microUSB cable through the wall or just use the internal battery and remove the Ring every so once in a while to recharge it.

It’s held in place by plastic tabs and a couple of small screws on the underside. This is secure enough in terms of it getting accidentally knocked but it does mean the Ring is rather easy to steal. This had been exposed as a security risk but a firmware update means that nerdowells can no longer potentially access your WiFI via a stolen Ring.

Before you go attaching the Ring to your wall you’ll want to set it up, which is done by following the instructions on the excellent app. Essentially it’s a typical procedure for these sorts of devices, where the Ring creates its own WiFi network when you press the orange button on its back and the app then connects to that network and allows you to add the details for your home WiFi.

Sign up to the Ring service with an email address and password and you’re pretty much ready to roll.

Once installed the unit looks very smart, with its metal bottom section and glossy plastic top. It is somewhat weatherproof but you’ll still want to install it somewhere reasonably sheltered to keep it looking its best, and reduce the risk of damage.

It has just a handful of external features. There’s the doorbell button itself, which is surrounded by a ring of lights that flash in various patterns during setup and when the button is pressed.

Above this is the camera’s lens and above that is an array of infra red LEDs for night vision.

The camera can record in up to 720p at 15fps, which is actually fairly modest by modern IP camera standards. Many alternatives offer 1080p at 30fps. But, it’s certainly sufficient for the closer range sort of surveillance the Ring will primarily be used for.

Meanwhile the lens is a fish-eye style with a huge 180 degree horizontal and 140 degree vertical field of view. The fish eye lens means you actually have even less overall resolution as the circular image is squashed in to fit the video resolution. So if resolution is a key concern, this may not be the security camera for you.

All of which brings us to what this camera can actually do. First and foremost is that when someone presses the doorbell you’ll be alerted on your phone, and you can then choose to answer the call and talk to the visitor while viewing them wherever in the world you might be. This makes it great for those that may be concerned about dodgy visitors or that travel a lot.

You can also set it to record a video clip when the bell is pressed or when the motion detection picks something up. The detection works well and you can setup various zones and ranges so that, for instance, you can tweak it so it ignores passing road traffic.

You can also add so called Chimes to your Ring setup. These are just bells that can be set off by the Ring via your WiFi. So if you have a large house or want to hear the door when out in the garage you can add one of those.

All told, it’s a really easy system that’s super quick to setup and that so far in my experience has worked flawlessly. I’ve only set it up to use the internal battery and in the couple of weeks I’ve been testing it I’ve only hard to charge it once, even while it’s been recording dozens of video clips a day.

As such, I’m pretty impressed with the overall experience. The video quality could be better but every other aspect of the experience works well and is easy to use.

However, there’s one fairly major problem. You only get one month free of the cloud service that is needed to record video, after which you’ll have to pay £2.50 a month. And there’s no way to simply record to a local device like a PC instead. You can still see real time video for visitors but without recording the Ring loses a huge amount of its usefulness.

Considering the Ring costs £159 up front I’d hope for six to twelve months before I had to start paying anything extra. Moreover, it would be nice to see Ring could offer some sort of basic free option, like Netgear does with its Arlo cameras.

Combined with the fact the footage is definitely a step down from the best IP cameras and it just takes the edge off an otherwise impressive device.

Overall it’s still a decent option if you simply want a super easy, one stop home security option, but depending on your priorities a dedicated IP camera might be a better choice.