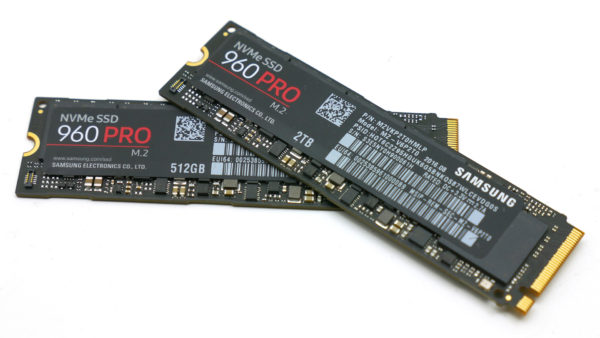 The fastest SSD you can buy

Samsung has been dominating the SSD market for the last few years thanks in large part to it being the first to manufacturer 3D NAND technology. One of the big beneficiaries of that tech was the 950 Pro range that launched last year. Incredibly fast yet tiny and coming with a 10 year warranty they’ve been pretty much the defacto SSD choice for enthusiast PC builds ever since.

Well not any more.

Samsung has just launched the 960 Pro and it takes performance to another level and comes in much larger capacities too.
The new drives look largely identical to the 950 Pro, and just about any other M.2 SSD. 80mm long, just a couple of millimetres thick and 22mm wide, it should fit in just about any motherboard with an M.2 slot.

Likewise it should fit in many a laptop, but double check that the fitting is the M type and not B type. Also, check your motherboard stats to make sure the M.2 slot is a four-lane PCIe type capable of 32gb/s. Otherwise you won’t get the maximum performance from these drives.

There’s only so much you can do to make an M.2 drive look good, but Samsung has done a decent job. The use of a black PCB and black labelling gives these drives a slightly smarter look than most and the 960 Pro has the main logo on the top, rather than the back like on the 950 Pro, so it should be visible in most motherboards.

On the back there is still a sticker, though, and it has a rather unusual feature. Because of the speed of these drives Samsung has had to think about how to keep them cool. To that end this sticker has a very thin layer of copper in it to help dissipate heat. Samsung reckons this helps the drive last twice as long as the 950 Pro during intense activity before the chips will have to slow down slightly to reduce heat.

Another change is that in order to be able to offer these drives in up to 2TB capacities Samsung has had to pack in four NAND modules. This leaves only a small space for the controller and so the company has stacked the drive’s small portion of DRAM on top of the controller, which is rather neat.

The DRAM is there to act as a cache or buffer between the NAND and the controller, helping to keep the drive delivering and receiving data as fast as possible. Meanwhile several onboard capacitors ensure any data in DRAM is written to NAND in case of power failure, ensuring data isn’t corrupted.

The controller itself is called Polaris and Samsung hasn’t revealed much about it except to say it’s a five-core design, as opposed to the three-core design of the 950 Pro’s controller.

As for the NAND, it’s Samsung’s latest 48-layer 3D NAND, up from the 32-layer process used in the 950 Pro. To recap, 3D NAND is where each wafer of silicon has a number of layers of memory cells formed on top of each other, as opposed to the traditional production method where all memory cells would only be in one layer.

This hugely increases the density of the chips, and is the main reason Samsung has had such an advantage over its competitors in recent years, as other manufactures such as Micron have only just started to ship their 1st version of 3D NAND.

Each wafer or die has those 48 layers and comes in at a total of 256Gb of storage. Up to sixteen of those dies are then stacked on top of each other to create each of these packages. Samsung uses four even on the lower smaller capacities as it makes for better performance by distributing the workload.

Like the 950 Pro, the 960 Pro’s NAND is all used in an MLC fashion. That is, only two bits of data are stored in each memory cell. That’s as opposed to TLC NAND, which uses three bits. TLC allows for much greater data density but is much slower to write to so various tricks are used to increase short term write speed. With MLC, though, write performance is consistent.
All of which brings to the speeds and feeds. So the 960 Pro will be available in 512GB, 1TB and 2TB versions, which is a big leap up from the 256GB and 512GB options of the 950 Pro.

Also taking a big jump is performance. Comparing the two 512GB drives, sequential read and write performance has risen by 28%, while the 1TB and 2TB drives are 40% faster. Random read performance has also leapt by a similar amount while random write speeds have tripled.

And, to cut a long story short, those figures hold up under testing. I encountered a few anomalous results but at least in part some of that is to do with these drives being so fast some benchmarks like CrystalDiskMark simply can’t keep up, while it only takes a small blip elsewhere in the PC to slow reported speeds down.

How does that translate to real world performance? Well, boot times and game load times are improved but it will feel like a subtle difference. 40% is a decent jump in read speeds but it’s nothing compared to the 400% increase you get moving from a SATA SSD to an NVMe drive.

And that brings us to the two potential issues with these drives. The first is price. While the 512GB version is actually slightly cheaper than the 512GB 950 Pro was at launch, it’s still a lot of money and without a 256GB option it means many buyers will no longer be able to afford a Pro drive.

Thankfully Samsung is also releasing a 960 Evo drive very shortly and it offers performance that should actually beat the 950 Pro in most scenarios so it should make for an ideal budget option. However it is TLC product so some users may still pine for a Pro drive.

The other issue is that Samsung has halved the warranty on these drives. While the 950 Pro had 10 years these get only five, and the 960 Evos only three.

This doesn’t actually mean the drives won’t last as long, as they’re rated even higher in terms of the total amount of data that can be written to them. It just means that if they do happen to unexpectedly fail then you’ll have less time to call on Samsung for a replacement.

In the end then. What’s without doubt is that Samsung has well and truly claimed the high performance SSD crown, and then some. If you’re simply looking for the best then the 960 Pro is the one to get. The higher capacity drives are expensive but nothing else comes close in terms of performance at those capacities.

However, for most home users with a tighter budget, the reality is that the 960 Pro is slightly overkill and the upcoming 960 Evo is probably going to be the better choice, even for those who consider themselves pretty hardcore users. You won’t get the bragging rights of a Pro drive but you’ll still get a very very fast SSD that will keep tabs with the Pro for the vast majority of day to day tasks.