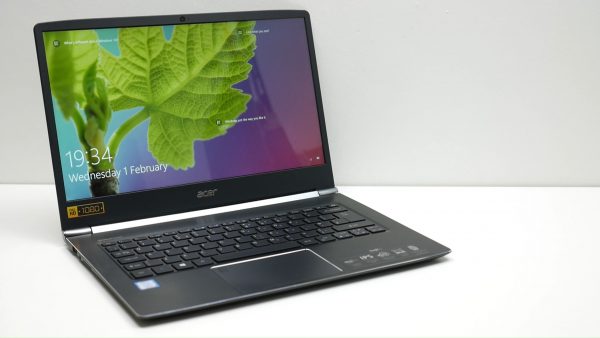 A great value 14in ultrabook

The Acer Swift 5 has a lot in common with the most premium £1000+ thin and light laptops, such as the Apple Macbook, Dell XPS 13 and Acer’s own Swift 7. It’s thin, it’s light and it’s mostly encased in metal. However, where those machines compromise connectivity and cost in the pursuit of the most premium look and slimmest profile, the Swift 5 takes a far more sensible approach.

Not only does it include a wealth of connections it’s also available for just £699, making it a great option for those seeking portability and style without breaking the bank and without sacrificing practicality.

Clearly, though, where this laptop can’t compete with those £1000 plus laptops is in design. This is a nice looking laptop but not a truly premium one. Where the likes of the Macbook feature aluminium panels that are hewn from solid metal, the Acer uses far thinner sheet metal that has been stamped into shape and then painted.

It’s also only the top and keyboard surround that are metal anyway, with the base and screen surround being plastic.

Elsewhere, though, the Swift 5 wants for very little. Its 14inch display is squeezed in to an impressively small chassis such that you have very thin bezels around it. The whole laptop is also very thin and light, at just 14.85mm thick and 1.36kg in weight, which is 13in macbook air territory. In contrast, the 14inch Lenovo 510S, is nearly 20mm thick and weighs 1.7kg.

What’s more, despite that slenderness you still get loads of connectivity. On the left is a USB 3.0 port, a headphone jack and an SD card slot while on the right is a full-size HDMI, another USB 3.0 and a USB type C.

That’s a great selection that means just about the only thing you’ll ever need a dongle or adapter for is connecting to a wired network.

The keyboard, while not quite so impressive, is also pretty good. The size of the laptop means it’s plenty spacious enough while the layout is more or less spot on. Plus, here in the UK you get a proper UK layout rather than a rehashed American one, so speedy typers should have no problem getting up to speed.

My only gripe with the layout, which is a personal preference, is that I like the way Asus and Dell among others, have the Pg Up, Pg down, Home and End keys as secondary functions of the cursor keys. Here those buttons are set just above the cursor keys, which actually makes for a double inconvenience as it’s all too easy to press them accidentally.

The key action, though, is nice and defined yet not too stiff so you don’t have to hit the keys too hard to guarantee they’ll respond.
The keyboard is also backlit, and this is another area where this laptop lacks the last bit of finesse of more expensive machines. From above it looks fine but from a normal typing angle you can see that the keyboard surround and keys don’t quite line up properly so the light spilling out from below the keys looks uneven. It’s not a practical concern but a minor aesthetic one.

As for the trackpad, it’s a similar story. It’s mostly good but nothing special. The positives are that it’s a decent size, fingers glide easily over its surface and tracking is fine. However, the click isn’t quite as precise as more expensive machines, requiring just a bit more force to activate.

Incorporated into the top left of the trackpad is a fingerprint reader that works well in conjunction with Windows hello, for quickly and securely logging in to your laptop.

Another area where this laptop really shines… is its display. The 14inch LCD panel has a plentiful resolution of 1920 x 1080 pixels and uses IPS technology to ensure it has great viewing angles. Coupled with good overall colour accuracy, contrast and maximum brightness, it’s good for just about anything you throw at it. The only downside is the glossy finish, which inevitably picks up reflections far more readily than matt screens. However, it appears to have an anti-reflective coating that when combined with the good maximum brightness level means it’s still mostly practical to use in bright light.

As for performance, at the heart of this machine is the choice of either the Intel 7200U or 7500U, both of which are brand new Kaby Lake processors. Both are also dual-core with hyperthreading, with the 7500U having a slightly higher clock speed and larger L3 cache. The extra £100 for the 7500U probably isn’t worth it for most users but some will value the extra 15% or performance boost it should provide.

Otherwise, you get a 256GB SSD and 8GB of RAM, making for a machine that’s got all the speed you’ll need for day to day tasks. The SSD isn’t of the ultra-fast PCIe variety but is still plenty fast enough.

When it comes to gaming, you can just about play a few basic games but anything truly demanding will be unplayable.
Far more impressive is this laptop’s battery life. It managed 9hrs and 25mins in my Powermark test, which compares to 8hrs 37mins for the similarly priced Lenovo 710S.

You also get the latest MU-MIMO WiFi, while the stereo speakers are perfectly adequate, even if most of the leg work is actually done by the Dolby Audio software.

Before I wrap up, there is one final thing that puts a damper on my enthusiasm for this laptop. It’s annoying to see Acer has installed some fairly egregious bloatware on this machine. It can be uninstalled but it shouldn’t be there in the first place.

So all told, this is a pretty solid option for the price. The Lenovo 710S offers a very similar selection of features for the same money, and it has arguably a slightly nicer design and it uses a matt screen, which some of you might prefer. However, the Swift 5 has an hour better battery life and better connectivity, so it somewhat depends where your priorities lie.
Either way, this is a good option that’s well worth considering.