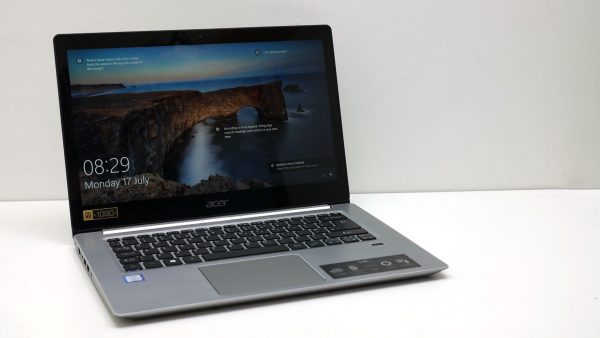 The best 14in laptop you can buy gets a refresh

I was seriously impressed by the previous version of the Acer Swift 3. It had a great balance of features, design and performance for a great price.

Now Acer’s back with an updated version that includes… well not all that much really. There’s a tweaked design and new screen but otherwise the core of this laptop is the same. So does that mean it again comes away with a solid recommendation?

As mentioned, one of the key changes with this new version is its design. The all-metal exterior remains, and it looks pretty much as good as ever, although now the top has a brushed finish rather than plain anodised style of before.
However, the addition of these chamfered edges I don’t think improves the look and moreover it doesn’t improve the feel. There’s a sharpness to the keyboards surround’s edge that, while it’s unlikely to cut you, it can catch your nails and just doesn’t feel that comfortable.

Otherwise, there’s a lot to like about the external design. This machine is just 18mm thick and weighs 1.6kg so it’s very portable. With dimensions of 338 x 234mm, its footprint is a little larger than the very smallest of ultraportable laptops, but it’s still plenty small enough to easily carry around everywhere with you.

As for connectivity, this is one area that has seen a clear improvement. Now you get two USB 3.0 ports instead of one! There’s also a full-size HDMI, USB Type-C and a headphone jack on this left side, plus an SD card reader and USB 2.0 port on the right. Here there’s also a couple of lights to indicate that the laptop is on or in standby and if it’s charging, plus there’s a Kensington lock slot. There’s no wired networking connection so you’ll need to use a USB adapter for that but you get 2×2 ac Wi-Fi and Bluetooth so you’re all set for wireless connections.

Now this version of the Swift 3 is actually 100g heavier than its predecessor, which isn’t too much of a concern, but the reason for this increase is the addition of a glass front to its 14in screen.

This is nice from a design standpoint, and makes it look all the more like a macbook pro, but overall the changes to the screen aren’t positive. As well as adding a little extra weight, the glass is far more reflective than the old screen, despite it having an anti-glare coating. A glossy finish can make for slightly deeper looking dark colours but, there’s a reason most pc monitors go with a matt finish.

What’s more the actual image quality of the screen has dropped too. Its contrast level has gone from well over 1000:1 to just 735:1. That’s far from the worst figure we’ve ever seen but it visibly makes for a slightly more muted looking image.

Otherwise, performance is roughly the same as before. Maximum brightness is a touch low at just 249nits, so working in bright sunshine may prove difficult. Colour temperature is reasonably accurate so colours don’t look too warm or too cold, and sRGB coverage of just 61.4% shows that this display struggles a little to show the full range of colours.

All of which is to say it’s still absolutely fine. It’s an IPS LCD panel so viewing angles are good and overall it still provides a perfectly decent experience for everyday computing, thanks in large part to having a plentiful Full HD resolution. However, content creation professionals will find it lacking and it’s just a shame it’s a step back in quality from the previous version.

As for the keyboard and trackpad. The former is backlit, which is always useful, and its layout is great, with UK users not being stuck with a US key arrangement. The key action is a touch shallow and soft for my liking, making it a little more difficult to touchtype, but it’s a minor point.

Meanwhile the trackpad is great. Large, smooth-gliding and responsive. It just works.

On the inside is where this laptop has seemingly changed the least. It’s still based on the choice of either an Intel Core i3-7100U or a Core i5-7200U. Both dual-core chips with hyperthreading, the 7100U runs at 2.4ghz and can’t doesn’t have a higher boost frequency while the 7200U has a base frequency of 2.5GHz and boosts to 3.1GHz.

The slower version also only comes with 4GB of RAM and a 128GB SSD, compared to the 8GB and 256GB that accompany the faster processor. As such, while many casual users will probably be quite happy with the cheaper version of this laptop, and the £100 saving it brings, more demanding users will definitely want to spend the extra.

As for overall performance, I’ve tested the 7200U version and it’s absolutely fine. It’s totally sufficient for all day to day computing and only comes unstuck when you throw something particularly demanding at it like video editing, but that’s to be expected of any laptop of this calibre. And, technically, Acer has managed to eek out a touch more performance than before, even if it is a tiny increase.

Incidentally, I did try and get into this laptop to see what upgrade options are possible but simply couldn’t get the two panels of the base to come apart without risking damaging them. I suspect the only upgrade option would be swapping out the SSD, as it’s likely to be a standard M.2 type.

As for battery life, Acer claims it’ll provide up to ten hours, but that’s being unrealistic. At a sensible brightness level it lasted seven hours and 36 minutes. That’s still plenty, and you could maybe stretch to another hour or so by really dialling the brightness back. Meanwhile, an hour of Netflix at the same brightness dropped the battery by 11%, so you may be able to get even closer to ten hours just watching video.

Overall, then, Acer has largely delivered the goods again. The Swift 3 is a nice-looking laptop with good all-round performance and, for £650 or £750, depending on which configuration you get, it offers reasonable value. However, the slight drop in screen quality from its predecessor, the sharp chamfered edges and the fact that you’re now paying £100 more for the same core configuration as last time means it isn’t quite the standout bargain it once was.