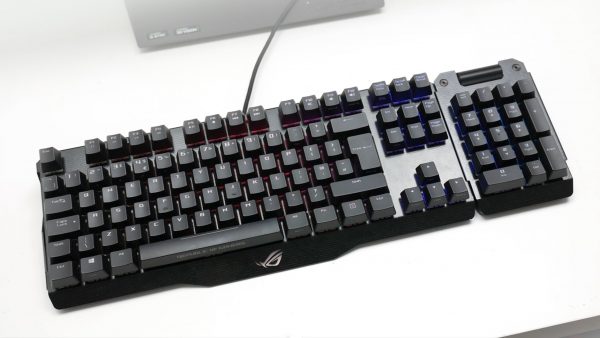 The Asus ROG Claymore grabbed plenty of headlines when it first launched as it was one of the most expensive gaming keyboards ever. A few months later and it’s still demanding a hefty £200 in the UK and $250 in the US. So, can it possibly deliver enough goodies to justify that price? Well, it’s closer than you might think.

For a start, there’s the build quality of this thing. While the base is plastic the top plate is a thick slab of aluminium that looks and feels reassuringly expensive. I also prefer the smooth painted finish used here to the brushed aluminium of Corsair’s keyboards. It feels nicer and is easier to clean.

I’m also a fan of the overall design. Asus can go a little overboard with its ROG products but the Claymore manages to find a good balance. It’s edgy without being garish.

Like Corsair, Asus has gone for a design that has the keyswitches stand proud of the base, rather than sit slightly set into it. Which design you prefer is personal preference but I find the sunken style ones a little more practical as the keycaps are protected, plus the surround helps to contain the backlighting of the keys, making it look tidier. Here, the lighting just spills out everywhere.

Otherwise, the backlighting ticks all the right boxes. All the keys and the ROG logo on the front are fully programmable, so you can create all manner of wild and wonderful lighting schemes.

The switches themselves are proper Cherry MX ones and you can choose from the usual Black, Blue, Brown or Red options, although availability may depend on where you are in the world.

Being Cherry MX the typing experience is as excellent as ever, plus you get the ability to swap the keycaps. Keyboards that use their own mechanical switches often don’t have this option.

In terms of key layout, it’s fine but you don’t get any extras, which in many ways is the main disappointment with this keyboard. Considering its price you’d hope to get at least a handful of extra keys or multimedia buttons, but the only extra you get is an admittedly satisfyingly chunky volume wheel, so at least that’s something. All other extra functions are left to secondary actions, which are activated by the function key that sits in place of the right-hand Windows key.

You also miss out on a USB pass-through, though the cable is a removable microUSB one, so you should have minimal hassles if you break the original cable.

So far, then, the ROG Claymore hasn’t exactly overwhelmed. It looks nice and is well built, but that’s not enough to justify £200.

No, that’s where this keyboard’s party trick comes in.

You see, the numpad is removable and can be attached to either side of the keyboard.

This opens up a range of possible uses. Remove it and it simply makes the keyboard more portable. Meanwhile, left-handed users may prefer having the numpad on the left and right-handed users, can use a normal configuration for typing but then swap the numpad over or remove it altogether for gaming. This gives more room for your mouse and makes for a slightly more comfortable angle for your arms too. Plus, having the numpad on the left means you can use it for gaming macros. Although, you would only really have easy access to two buttons.

Nonetheless, I definitely found the versatility of this keyboard to be very useful.

The attachment mechanism is also sturdy and seems like it should hold up to plenty of use, though it would be nice to have some sort of lock on the bottom that securely attaches the two halves.

Meanwhile, for those that don’t see the appeal of the numpad at all, you can also buy the Claymore in a tenkeyless design and it comes with rubber covers for the connections to stop them getting damaged and dirty.

Overall, then, it would be a stretch to say the ROG Claymore fully feels like it justifies its high price. A couple of extra keys or a USB pass-through would’ve sweetened the deal considerably. But there’s definitely enough to its modular numpad design that for some users it’ll feel worth every penny to pay the premium.