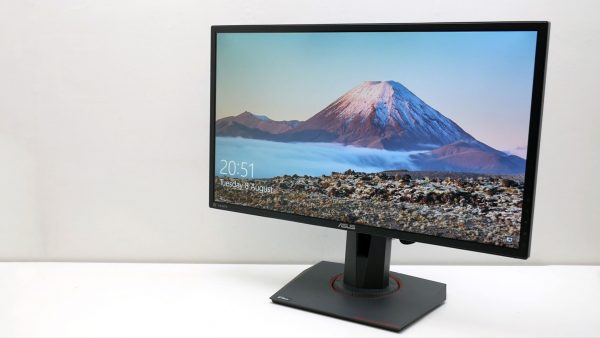 As such monitors go, it’s one of the more expensive options out there, and in some ways it fully justifies this, but in other ways it falls well short.

So the main reason to get this display is its design. Its relatively slim, low-profile bezel and tidy stand design makes it look far smarter than most others. Though notably, it isn’t as nice as Asus’ G-Sync toting monitors such as the PG278Q.

Nontheless, the stand is a practical one. It offers a full range of ergonomic adjustments and provides a really solid foundation for the display. It can also be removed and a VESA mount used instead.

Asus’ ever reliable onscreen display controls are here too, making setting up and adjusting this display a breeze. The little joystick and button combo works as quickly and intuitively as ever and they’re combined with a set of menus that’s clearly laid out and easy to navigate.

The menus are also comprehensive, with loads of options for tweaking image quality and gaming performance. In fact, it’s maybe a little too comprehensive. The mass of colour presets is more confusing than anything else while a lot of the gaming extras like the crosshair and fps counter feel superfluous.

As for connectivity, the essentials are here, with one each of DisplayPort, HDMI and DVI, plus there’s an audio input, headphone jack and some basic speakers. However, you miss out on a USB hub, which is a shame given this monitor’s price.

Moving onto the display itself and this is where the MG248Q really wobbles. On paper, it’s entirely typical. It’s a 6-bit TN LCD panel with a 1ms response time, 144Hz refresh rate, 1080p resolution and a flicker-free backlight.

However, Asus has well and truly failed to get the best from this panel. Whichever of the image presets you choice, colour accuracy is poor and there’s a slight dull, greyness to the image from its gamma being too low. What’s more, that’s when the display’s at 60Hz. Switch to 144Hz and it gets worse.

Thankfully, though, if you are able to calibrate this display properly, it can be brought into line. Adjust the RGB levels and things look a heck of a lot better. But having to make such severe adjustments is not good enough.

Plus, again there’s a big difference between 60Hz and 144Hz performance.

To be clear, the display is okay even in its default state but you can get noticeably better image quality from several competitors both out of the box and once calibrated.

It’s a shame, as in terms of gaming performance this display is absolutely fine. Its combination of a 144Hz refresh rate, 1ms response time and Freesync works wonders and its default overdrive setting is spot on too.

So, overall, if you are able to properly calibrate this display, or you’re lucky enough that using the same colour settings as shown here work on the model that you buy, then the MG248Q is still worth considering, thanks to its nice design.

If not, though, then it doesn’t represent good value. Other displays offer better image quality and equally good gaming performance for considerably less.