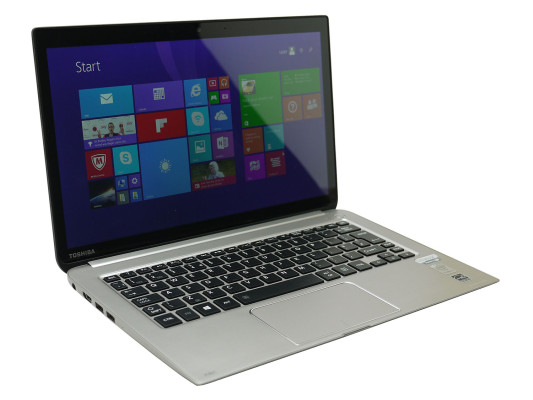 Toshiba’s updated Kira ultrabook packs in a snazzy magnesium alloy chassis, 2k resolution touchscreen and the latest Intel processor to make for what should be a really desirable ultra-lightweight laptop. Unfortunately a host of little slipups means it falls short, though opting for the non-touchscreen version may alleviate some of these.

The first key criteria for any ultrabook laptop is that it’s slim, light and looks great and its here that the Kira straight away has a bit of a wobble. Thankfully not literally.

Ostensibly the design is fine – it’s a simple, slim, silver wedge of a thing that’s actually a little smaller and lighter than many of its 13in ultrabook stablemates. However it’s just not quite as nice looking or feeling. 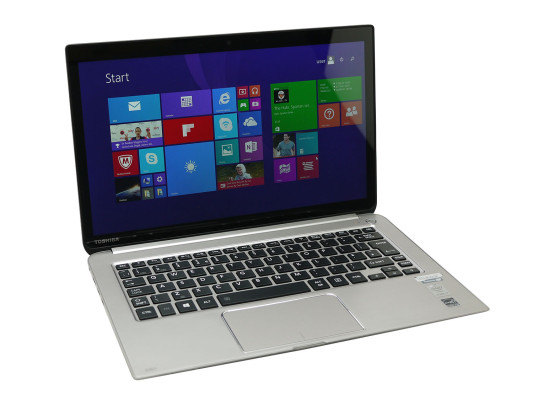 Both problems stem from the same crucial choice to use magnesium alloy rather than aluminium for the construction. Although incredibly lightweight and strong, it can’t be machined into the same wonder brushed finish as aluminium so instead has to be painted, which immediately makes it look a little cheaper.

Also, because it isn’t machined from a solid billet you don’t get that reassuring rigidity, with the body panels flex a little when pressed.

Add in the bizarre choice to have rounded corners on the back and sharp corners on the front, plus the somewhat out of place chrome trim on the trackpad and you have a machine that could easily be mistaken for costing half what it actually does.

It’s a similar feeling when you fire the machine up and look at the display. On paper its ultra high resolution should make us swoon but in the flesh it’s a little underwhelming, particularly thanks to the high reflectiveness of the glass touchscreen. Viewing angles also don’t appear all that great, though again this is not helped by the reflections.

That high resolution also makes little impression as ultimately you very rarely see it when doing normal tasks. Because it’s such a high DPI you need to use Windows’ scaling tools to zoom in and so it just looks like a 1,440×900 display rather than 2,048 x 1,556.

This is one area where Apple’s OSX still holds a significant advantage of Windows as it does a better job of making the user aware of the high resolution on offer, even if – just like with Windows – it’s only really taking full advantage in programs like photoshop or when watching high-resolution video.

All of which makes it particularly surprising that when testing with a professional colorimeter the display actually produces exceptional results.

A black level of just 0.1nits combined with a maximum brightness level of 291nits makes for a massive 1796:1 contrast ratio. That’s one of the best results you can get on a laptop.

It’s 92.7% coverage of the sRGB space is decent too and a Delta E score of just 0.14 is again about as good as it gets on a laptop. Only a slightly high colour temperature of 7639K lets the side down, though this can be tweaked using the preloaded ChromaTune software.

All told, if you’re after a professional display for photo and video editing, it’s actually well up to the task (though notably the overall performance of this machine doesn’t make it ideal for that scenario) but it just doesn’t feel as nice to use day to day as the Dell XPS 13 (2015). 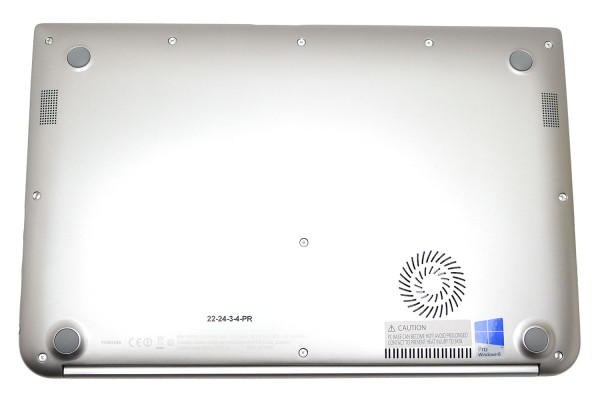 Where the Kira pulls things back a bit is on the features front. You get three USB ports (though only one is USB 3.0), where on most ultrabooks you only get one or two, and you also get a fullsize HDMI. It’s not often most of us plug an ultrabook into a TV or projector but it’s definitely nice to have the option without needing an adapter.

You also get an SD card slot and headphone socket, plus on the inside is 802.11ac Wifi and Bluetooth 4.0. For connecting to a wired network you’ll have to get a USB to Ethernet adapter.

Another feature that’s a cut above is the SSD, which at 256GB is double the capacity of most.

The Kira’s keyboard is largely very good. It’s nicely backlit for easy use in the dark and its layout is fine. The typing action is also entirely acceptable.

The only concerns we really have are that we really like the way Asus and Dell have PgUp/Dn and Home/End as sceondary functions of the cursor keys – it’s just such a convenient arrangement for if you do a lot of writing and editing. Here though these are elsewhere.

Likewise the trackpad is fine. Nothing standout but it’s responsive, nice and large and is setup well right out the box so you don’t have to dive into the driver to tweak it to work properly as you do on some laptops.

As an ultrabook the Kira is not going to set any records for performance but it’s totally adequate for day to day computing, plus in our benchmarks it’s actually a little quicker than some competitors.

When it comes to battery life the Kira is again typical ultrabook territory, lasting around 10 hours in general light use and watching video. However under test conditions it is just a touch behind the Dell XPS 13 again, lasting nine hours and 38 minutes compared to 10 hours and 57 minutes.

Toshiba Kira – Other things to consider

One final thing we weren’t keen on with this laptop is that its packed full of annoying software. We understand the addition of antivirus but WinZip, CyberLink Media and Symbaloo can all do one, frankly.

You can also buy the Kira without the touchscreen and with a lower resolution 1920 x 1080 screen, and that’s actually the one we’d go for, and would actually be really interested in reviewing. It costs £899.99 compared to the £999.99 of the model we’ve reviewed.

It’s also worth noting that prices have dropped since initial launch from around £1100 for this model and this new price is much more appropriate. Indeed were it not for such stiff opposition it would actually be a good choice.

The Toshiba Kira (2015) should in theory compete with the best ultrabooks but it just doesn’t quite cut it where it matters. Unless you really need the high resolution touchscreen and the HDMI socket, we’d go for the Dell XPS 13 or the MacBook Air 13in instead.