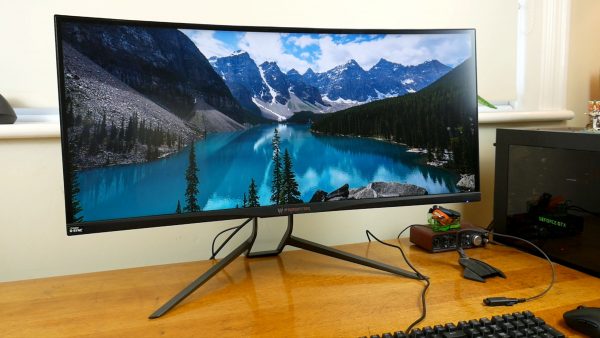 The best 34inch gaming monitor you can buy

The Acer X34P is the followup to the hugely popular and generally excellent Acer X34. Like that display it boasts a 34inch curved IPS LCD panel, a 3440 x 1440 resolution and G-Sync but here Acer has improved some of the key shortcomings of its predecessor, making for one of the best gaming displays you can buy.

The good stuff starts with this monitor’s design. Round the back, the glossy plastic of the previous model has been replaced by a brushed plastic finish that looks far nicer and won’t show fingerprints and dust so readily.

Round the front, things are much as they were before. There’s the lovely solid metal stand, the matching grey plastic strip along the bottom bezel and the Acer Predator logo. You also still get the low-profile bezels, though notably these aren’t as narrow as the low-profile bezels on some displays.

This display also has a slightly tighter curve to it than the previous version. It doesn’t exactly leap out at you but it works nicely, pulling in the edges of the monitor enough to improve the viewing angle without feeling like it’s encroaching on your desk like the massive Samsung CHG90, or compromising the view in any other way.

Another feature carried over from the previous X34 is the underlighting, although here you get ten LEDs instead of nine! Otherwise it offers the same choice of breathing, flashing or static lighting styles and you can choose from seven colour modes, including one that has the LEDs try and match the colour of what’s on screen. The latter would’ve been my preferred choice but annoyingly it doesn’t let you adjust the brightness.

Also emanating from the bottom of the screen is perhaps this display’s biggest surprise. You get a pair of surprisingly capable speakers. There’s far more volume and depth than the vast majority of monitor speakers, to the extent you could just about get away without separate speakers, if you only use them occasionally.

Joining the new look back of the display is a slightly tweaked stand design. You still get the mix of a grey painted metal base, a brushed shiny metal rotating mechanism and a black plastic main section but the plastic now fits in a little better with the rest of the back’s overall look.

The stand also offers height adjustment, rotation and tilt, though as with all these 34inch ultra wide displays, you can’t pivot the display into landscape mode. At the top of the stand there’s also a convenient carry handle, as before.

Connectivity hasn’t changed from the X34, either, though the placement of ports has slightly. The Power, DisplayPort and HDMI inputs are now housed in a compartment that can be covered over to neaten things up, while the four USB 3.0 ports are kept separate, for easy access. This largely makes sense except the USB uplink connection is also external, despite it seemingly being the sort of permanent cable that should also be under the cover. Also, the vertical arrangement of the video inputs makes them a bit awkward to plug and unplug.

Above the connectivity are two plastic sections that can be unclipped to access the four screws that attach the stand. Remove these and you can fit an alternative monitor mount.

Moving onto this display’s on screen display controls and they’re excellent. A mini joystick and three buttons are used to control the menus and the way they work is really intuitive. The menus themselves also respond quickly and have all the options you’d hope for.

The picture menu lets you adjust basics like brightness and contrast while the colour menu has a plethora of options. You can alter the gamma curve, set the colour temperature and saturation and even adjust colour balance via cyan, yellow and magenta as well as red, green and blue.

The gaming menu lets you overclock the display from its default 100Hz up to 120Hz, you can add an aim point and you can adjust overdrive. You only get three options for the latter but these are sufficient. Turning overdrive off completely and there’s obvious ghosting, at Extreme there’s obvious inverse ghosting but at Normal there’s an ideal compromise.

So we come to the display itself and, well, if you haven’t tried a 34inch 1440p display before, they are fantastic. The extra width is super useful for work and great for movies and gaming too.

I said in my review of the Asus PG27UQ that using a standard 27inch display for showcasing such amazing HDR technology was the wrong move and that they should’ve used a 34inch display, and reviewing this display just a few weeks later really drives that point home. These ultra wide monitors still feel like the ultimate upgrade.

It’s not just a big, high resolution panel either. It’s also a quality one. You don’t get any headline grabbing HDR but instead it just provides excellent overall image quality.

For a start, viewing angles are superb, with almost no change in colour even at extreme angles. Colour reproduction is also fantastic, with every subtle change in tone accounted for properly.

Out of the box calibration is not perfect but it’s good enough for most uses, and if you are able to calibrate the display, the results are as good as you can get for a non-HDR gaming display.

To calibrate this display I reduced the brightness to 27 then switched to the User colour temperature option and tweaked the RGB values to 49, 47 and 50, plus I switched to the 1.9 gamma setting.

The uniformity of the image across the whole expanse of the screen isn’t bad either, considering the size of this thing. There’s just a 4% average variance in brightness across the whole of the display. Admittedly there is a slightly greater drop in the bottom left corner than I’d hope for, but it’s still reasonable.

The only major issues are the usual problems with IPS LCD panels, which are a low contrast compared to VA type LCDs, a slower response time than TN type LCDs and IPS glow. The lower contrast is something I’d personally take over the worse viewing angles, slower response time and less accurate colour reproduction of VA displays but your priorities may vary.

Likewise, the slower response time compared to TN panels is more than made up for by the vastly better overall image quality. After all, this isn’t really meant to be a competition level gaming monitor but one for more general at home use.

As for the IPS glow, open up a pure black image and sit reasonably close and you can clearly see what looks like backlight bleed in the bottom corners. Move even further off axis and this lighter patch becomes a significant distraction.

However, sit back a little and this disappears, and moreover, of all the problems that can occur with LCD displays, I strongly feel IPS glow is the least distracting in day to day use. With anything other than a pure black image, you don’t really notice it.

As for gaming performance, the increase from 100Hz to 120Hz does make more of a difference than I expected. Flipping between the two framerates and the latter feels just a little bit snappier.

That said, I was still reasonably happy playing the likes of Counter Strike, PUBG and Quake on this screen at either 100Hz or 120Hz. You’d still want to step up to a 144Hz TN screen for competition level playing but for more casual online fun, this display, and others like it are more than adequate.

As for G-Sync, it works as well as ever, providing a smooth and tear-free image that combined with the overall image quality makes for an utterly absorbing gaming experience.

So all told, this is a truly fantastic display that comfortably surpasses the previous Acer X34 and current Asus PG348Q. The only competitor that I’ve yet to try that could hold a candle to this screen is the Alienware AW3418DW, which I do hope to get in for review some time soon.

In the mean time, while it is very expensive and arguably a bit overpriced, thanks largely to the inclusion of G-Sync, this is still the high-end gaming display I’d recommend.