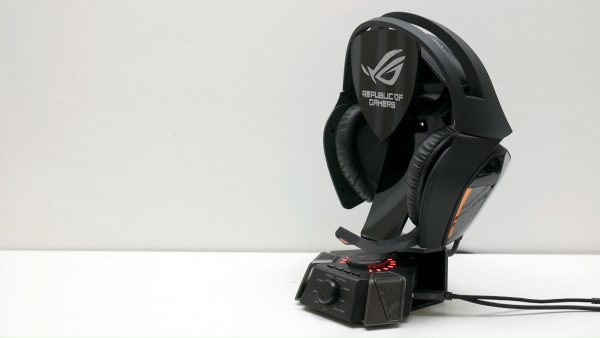 The Asus ROG Centurion is, on paper, the ultimate gaming headset. It has true 7.1 surround sound, a USB adapter with a loads of inputs and controls, plus it even comes with its own stand. But, costing £220, can it possibly justify such a high price?

Well, it certainly makes a good first impression. It arrives in an enormous, sturdy box that displays the headset in all its glory. Although, if you ever have cause to want to get the headset back into its box, it’s appeal soon wears off.

Included with the headset you get the aforementioned stand and USB adapter, along with a splitter cable for attaching surround sound speakers to the USB adapter, and there’s a USB cable for power.

Taking a quick look at the stand, it’s a simple plastic affair made from cut and bent sheet plastic. It will probably scratch and break fairly easily but it’s tough enough it should survive a few falls from your desk and it holds the headset securely enough. The main issue is how light it is. You’ll probably want to affix it to your desk in some way to make using it a little easier.

Moving onto the headset, it’s clear this is an updated version of the Strix 7.1 from a couple of years ago. It’s largely the same size and shape with the same feature set, and the USB adapter looks very similar too.

What Asus has sensibly done, though, is change the styling. The weird glowing eyes of the Strix were a step too far. This time round you still get lights but in the form of slightly more subtle Republic of Gamers logos.

Forward of this is a small decorative etched metal plate but otherwise the rest of the headset is muted matt black plastic.
The overall look is not exactly what you’d call modest but it’s not too garish.

It is, though, a huge headset. The earcups each pack in five drivers to provide their 7.1 surround sound, and the result is that these dwarf most other gaming headsets.

Despite this size the Centurion’s earcups aren’t all that comfortable. The padding isn’t particularly thick or contoured and there’s not a very deep gap before you hit the fabric covering over the drivers. As such the headset ends up slightly squashing your ears.

Still, the earcups and headband do a decent job of keeping the headset secure so you should have no problems with it falling off if you get a bit carried away.

In terms of on-headset features, there’s very little other than the fold down bendable microphone, which provides great sound quality thanks to noise cancelling that’s enabled via the second microphone housed in the USB hub.

The headset attaches to the hub via a tethered HDMI cable of all things so not only can’t you replace the cable if broken but the headset is unusable with anything other than its USB adapter.

Speaking of which, it’s here where all the magic happens. It’s both a control system and the sound card that delivers the audio to the headset. It’s powered by and connects to your computer via a single USB connection and there’s a second HDMI output for the aforementioned surround speaker adapter.

Incidentally, if you wanted to just connect stereo speakers, you could do so via the front speaker output.

The hub centres around the volume wheel that also controls various other settings like individual channel volume, lighting level, and spectrum audio profiles.

There are also buttons for switching between surround and stereo mode, switching on the headphone amp, turning on the mic and switching to speaker output.

All told, it works rather well and makes it really easy to manage your PC’s audio, whatever it is you’re listening to.

To get the most from the Centurion you’ll need to install the accompanying software, which is comprehensive and easy to use, though, quite why it defaults to turning on every single unnecessary effect, I do not know.

Sound quality, though and this is where the Centurion really shines. In stereo it’s clear there’s some quality audio circuitry in here as the level of detail is way beyond most gaming headsets. There’s power too, with plenty of bass and mid-range drive. Top-end stereo headsets such as the Sennheiser game one still outclass it but it’s far better than just about any other surround headset, virtual or otherwise.

Switching to surround mode and that true 7.1 shows what it’s all about. It’s incredibly easy to pinpoint the location of sounds bringing movies to life and providing a competitive edge when gaming. Virtual surround is very good these days but the Centurion shows that true surround still has an advantage.

What’s particularly impressive is that unlike some surround headsets, the sound here is well integrated, with it not feeling too obvious that a sound has moved from one driver to the next.

The end result is a seriously impressive surround gaming headset that thanks to excellent performance offers reasonable value. However, there isn’t quite enough here for me to be enthusiastic about it. The styling’s a bit of an acquired taste, comfort is only middling and it would’ve been nice to have slightly more universal and modular cabling so if, say, the headset fails then there’s still some use to be had from the USB hub, or vice versa. Or if you want to use your fancy headset with your phone then a normal stereo input would’ve been nice.

So, versatile it isn’t particularly, and for me that would be a deal breaker at this price. But if you all you want is pure surround sound performance then the Asus Centurion delivers.