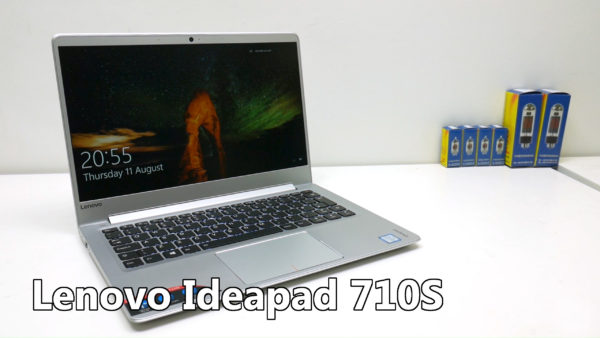 A high-end thin and light laptop for a great price

The 710S is Lenovo’s latest thin and light laptop that’s aimed squarely at the likes of the Dell XPS 13 and MacBook Air, yet it’s available from just £699.

But, is it a case of getting what you pay for?

Well, when it comes to design, the 710S largely gets things right, though it can’t quite compete with the very best. You’ve got an aluminium and magnesium alloy top, keyboard surround and base but the screen surround, sides and the actual internal framework of this machine are silver-painted plastic.

That means you get 90 percent of the look of a premium ultrabook but maybe only 75% of the feel, as it lacks the real heft of some other machines. The Dell XPS13 also uses plastic on the interior but it doesn’t try to hide it and the metal on the outside is thicker and sturdier.

But make no mistake, this is still a laptop that will have most people looking on in envy.

It’s also impressively thin and light. At 16.8mm thick including this rubber foot, and only 13.9mm without, it’s comfortably thinner than the Macbook Air and the Dell, plus its weight of 1.1kg beats both too.

None of the above come close to the new Macbook of course but it’s a slightly different class of machine, with a smaller 12in screen and Intel Core M processor.

Here we have a Core I processor and 13in screen that’s packed into an impressively small footprint thanks to these slim bezels. The Dell’s a touch smaller but obviously it’s thicker too.

As for connectivity, you get a decent if not spectacular selection. There’s a USB 3.0 port on each side, plus an SD card reader and micro HDMI on the right and a headphone jack on the left. Alongside is the power socket which links to the nicely compact power supply that unlike the Dell doesn’t have an annoying power brick mid-cable.

Getting back to the screen, with a resolution of 1920 x 1080 you get plenty of pixels to play with. Several rivals do offer 4K but personally it’s not something I’d put above overall screen quality, the potential reduction in battery life and cost.

And this is a quality screen. The IPS LCD panel has the great viewing angles you’d expect, plus there’s absolutely no evidence of backlight bleed, the colours really pop and the lack of a glass touchscreen means there’s no annoying reflections. Its sRGB coverage of 83.7% is a touch below the best but otherwise this is a display easily good enough for the majority of work that requires accurate colours, such as image and video editing.

Meanwhile, above the screen you get the obligatory webcam. It’s 720p. It’s fine.

Below the screen is of course the keyboard, and it’s largely a triumph. Its layout is great, with no annoyingly squashed or oddly placed keys and the key action is decent too, allowing for comfortable and speedy touch typing. There’s also backlighting, with two brightness levels and the option to turn it off altogether.

Sadly the touchpad doesn’t live up to the same standard. It’s nice and large and has the same one-button, click-anywhere surface of its rivals but the click isn’t quite as finely tuned and the metal surface of the pad isn’t as smooth-gliding as the etched glass of the best out there. Tracking and response is still fine, though.

Flipping the machine over and you can see the speaker grilles. From these comes a surprisingly full and pleasant sound, with more mid-range power than you might expect. Certainly they’re a clear step above the weak, tinny-sounding speakers on some laptops.

All of which brings us to the internals of this machine, and it’s impressively well equipped for the price. This £799.99 model comes with an Intel Core i7-6560U processor, 8GB of RAM, a 256GB PCIe SSD and Intel’s 540 graphics processor. That adds up to a surprisingly capable machine, with the CPU being more than enough for any general desktop, light gaming or occasional video editing work. The SSD is also lightning fast, at least for read speeds, with AS SSD reporting a rate of 1290MB/s. Combined they make for a really snappy feeling, fast booting machine.

What’s more that graphics processor is surprisingly capable. With a Score of 1319 in the 3DMark FireStrike benchmark, it’s got performance around half that of an Nvidia GTX 950M, which is a proper laptop-gaming graphics chip.

Opt for the £699 version and you drop to a 128GB SSD and an Intel Core i3-6100U that has Intel 520 graphics. That may not sound like much of a difference but it’s about a quarter as fast for gaming. For day to day computing, though, it’s fine, and markedly more reliable than Core M machines, which can get a bit bogged down, even with relatively light use.

Of course you also get inbuilt Wifi, which if of the AC variety and uses a 2 x 2 aerial arrangement, and you get Bluetooth 4.0.

Backing all this performance up is decent battery life. It managed 8hrs and 37minutes in my PowerMark test. Some ultrabooks can push a bit closer to 10hours but that’s still a very decent result, especially as this is the more powerful version of this laptop.

When it comes to the software side of things, well, last year Lenovo got quite a lot of flak for pre-installing loads of rubbish software, some of which included Malware and it was even forcing new software to be installed via the BIOS, when the user had installed a clean copy of Windows.

Now I haven’t gone to the trouble of doing a fresh install to test this, but the company claims to have stopped both practices, and given the scrutiny it’s going to be under right now I’d be surprised if it was still trying to do the same trick.

Nonetheless, you do still get quite a lot of rubbish and there’s a fairly insistent message that pops up every time you boot, prompting you to install even more. However it’s all optional and can be uninstalled.
So, in the end, I’m still happy to recommend this laptop. It’s not perfect, thanks to that trackpad and a design that’s maybe one notch below the best. But the Lenovo 710S still makes for a bargain, whichever version you buy.