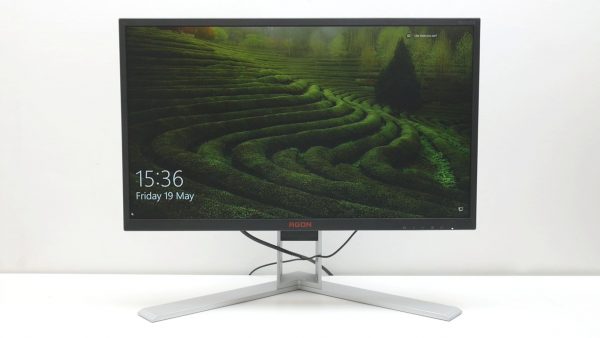 240Hz and Freesync make this a fantastic gaming monitor

Well, before we get onto that, let’s take a look at everything else this display offers.

This is a 25inch panel with a 1080p resolution, which means you only get a pixel density of 90pixels per inch. That’s quite low and results in quite a stretched looking, pixelated image that’s good for gaming but less so for productivity.

That limited resolution is for a good reason though. To reach 240Hz, 1080p is the maximum possible resolution that can be used before maxing out the DisplayPort 1.2 connection.

Elsewhere, AOC has packed this display with features, the most obvious of which is a fairly premium looking stand.

It’s nearly all solid metal and it offers height, rotation, pivot and tilt adjustment so you can quickly get it set up just how you like and easily access the connections round the back. It also incorporates a handle and, thanks to an included adapter, you can attach alternative monitor mounts too.

Also, not only are those connections easy to access but there’s plenty of them. There’s the DisplayPort, two HDMI, DVI and even VGA so you really can hook up just about anything to this display. There’s also an analogue audio input so you can add audio to the VGA and DVI signals, as well as a microphone output so you can pass-back audio from your headset microphone, the input for which is on the side, next to a headphone output.

You also get inbuilt speakers that are muted automatically when headphones are plugged in.

Here you’ll also find a couple of USB 3.0 ports, one of which provides standby power so you can charge your devices even when the monitor is off.

The input for the USB ports is next to the rest of the connectivity on the back, where there’s a further couple of outputs.

There are a couple other extra features too. A little flip-down headphone stand sits on the back and a wired remote for controlling the onscreen display and quickly switching between image presets plugs in round the back. I found I didn’t really use the remote but others may find it useful.

As for the overall styling of this monitor, the stand should have fairly universal appeal but the red panel on the back is a bit of an acquired taste, and the painted on AOC logo on the front bezel isn’t exactly the high of chic. Plus, the bezel isn’t low-profile, though is still reasonably slim. So, not the finest looking monitor I’ve ever seen, but still better than most.

What is just about the best I’ve ever seen, though, is image quality. For a TN panel, it impresses on just about every front, despite using just a 6-bit, rather than 8-bit panel.

Out of the box it just looks right, there’s no obvious colour cast or dullness to the image. Blacks look black, whites look white and everything inbetween is as it should be.

It’s still not really good enough for content creation, and the limitations of the 6-bit panel can be shown up when watching dark videos in particular, but it still puts to shame many other gaming monitors.

What’s more, image quality changes little when upping the refresh rate so you don’t have to worry about changing between refresh rates for desktop use or gaming.

All this and viewing angles are pretty good too. Unlike many other TN panels, there’s next to no shift in the image just from moving your head a little from side to side. And, there’s only a minimum of difference in colour between the top and bottom of the panel.

What’s more, this panel copes particularly well with light grey colours, which can often be where the limitations of TN panels are most obvious as they can look off colour and really highlight the slight variation in colour that you get from their poor viewing angles.

So, all in all, this monitor has laid a solid foundation so far. But what about that all important gaming performance?

Well, it is surprisingly good. For those into fast-paced twitch games you’ll immediately notice an upgrade in responsiveness over 144Hz panels, and when going back to 60Hz, well I genuinely thought something was wrong with my monitor it felt so slow.

Whether there’s truly enough of an advantage over 144Hz panels to result in a clear performance difference in typical online gaming scenarios, well it’s something I’m still investigating, but in terms of feel it’s a definite upgrade.

Now, this monitor doesn’t feature a backlight strobing blur reduction mode but comparing to other monitors with that feature, I’m still somewhat undecided on which I prefer. 144Hz with blur reduction looks clearer but 240Hz without feels more responsive, and on balance I think I prefer it.
Freesync also works well, all the way up to 240Hz, and I didn’t notice any reduction in responsiveness with it on.

All of which means I’m thoroughly impressed by this monitor. It delivers on every front, providing loads of features, a nice design, good overall image quality and the best gaming performance I’ve ever encountered.

The only sting in the tail is the price, which at around £420 or $500 USD is undeniably high for what still amounts to a 1080p, TN monitor. But, the exclusivity and performance of the 240Hz panel combined with all those extra features means it’s still reasonable value, and as such it’s a monitor I can thoroughly recommend.