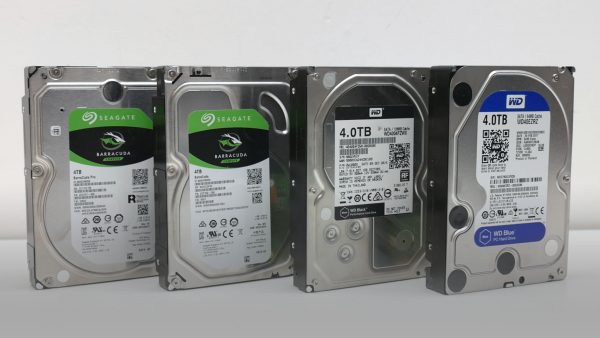 Hard drives may have long since been superseded by SSDs when it comes to your main system drive, but if you have a big media collection, or even just lots of games, then you’ll likely still need one or two hard drives to store all that bulk data.

But which should you buy? Is there still a place for performance hard drives or should you just buy the cheapest one going?

You can also get hard drives from Toshiba and Hitachi but at least here in the UK they’re far less readily available. And there are also several specialised hard drives designed for use in NAS drives or for surveillance video recording purposes. But, for normal desktop use these are your four main options.

So what differentiates them? Well, a few years ago performance hard drives would spin at 10,000rpm and conventional ones at 7,200rpm, leaving the slowest, cheapest drives running at 5,400rpm.

Now, though, 10,000rpm drives are no more while 5,400rpm is the standard, and performance drives are those that spin at 7,200rpm. And that’s the main difference between the WD Blue and WD Black and the Barracuda and Barracuda Pro.

Otherwise, the Black and Barracuda Pro drives are also available in larger capacities, with the Barracuda Pro topping out at 10TB. Plus, the faster drives have larger caches, and longer warranties, so not only are they faster but more durable too.

There are three downsides to the faster drives, though. The first is the most obvious which is price. The performance drives can be anything from 20% to 50% more expensive. Meanwhile they’re also more power hungry – though, in the grand scheme of things they still use very little power – and they’re louder too.

Of all these factors, it may actually be the latter that’s the biggest concern for many. While the WD Blue and Barracuda are all but inaudible over other fan noise, the pro drives are much more noticeable. Here’s a comparison.

Otherwise, with these drives all looking as thoroughly mundane as each other, it really does come down to how they perform.

Starting with the CrystalDiskMark benchmark, we can see that there’s a clear difference in sequential read and write speed for the budget and performance drives, with the Barracuda Pro pulling out a comfortable lead overall. This holds true for random read and write operations too, though the Barracuda Pro’s lead isn’t as significant and it’s the plain old Barracuda that really suffers in this test, coming in well below the WD Blue.

Moving on to AS SSD, here we again see the Barracuda Pro hold a comfortable lead over all others, while it’s the WD Blue that struggles. And this pattern again holds true for random read and write performance.

Most telling with this benchmark, though, is the access time. Access time is the speed with which a drive can lookup any single chunk of data and it’s the figure that defines why SSDs feel so quick. Because hard drives have to physically move a read write head and the disc has to spin round to the right place they have access times measured in the milliseconds. With SSDs, though, there’s no physical movement so access times are measured in hundredths of a millisecond.

But back to the performance of these hard drives, the faster spindle speed and more aggressive read/write head movement means access times for the pro drives are vastly faster than that of the normal drives.

And this is what’s crucial to making these drives feel so much faster in use.

Moving on to the storage benchmark of PCMark 8, this uses the data traces of several popular apps to test the performance of a drive. In some ways this highlights both why the faster drives are worthwhile and why they’re not. You can clearly see a consistent level of better performance, exemplified by the overall bandwidth figure.

However, the real world impact can often mean that you’re only saving 5 or 10 seconds out of a 100.

Nonetheless, there are scenarios where the difference is much more acute. Loading up an installation of Windows 10 onto these drives and we can see big differences in boot time, with the Barracuda Pro being 50% faster than the Barracuda.

So, in the end the picture is quite clear. If you feel you could do with the performance of a faster hard drive, such as for storing games or video files that you might still be editing, then the Barracuda Pro is the drive to get. It’s clearly the fastest out there and is priced competitively. It’s a touch louder and pricier than the WD Black but not enough to make up for the performance difference.

Meanwhile, if you’re just after cheap bulk storage and performance is only a secondary concern then, assuming you can pick them up for the same price, the WD Blue is the better choice. On average it’s the faster of the two drives while being no louder or significantly more power hungry.

So there we have it. Except for one final thing to note, which is that performance will vary depending on capacity as different drives within the same range are configured with different data densities and number of platters and so on. So, while the differences for these 4TB drives are clear, if you’re buying other capacities, I can’t guarantee you’ll see exactly the same results.