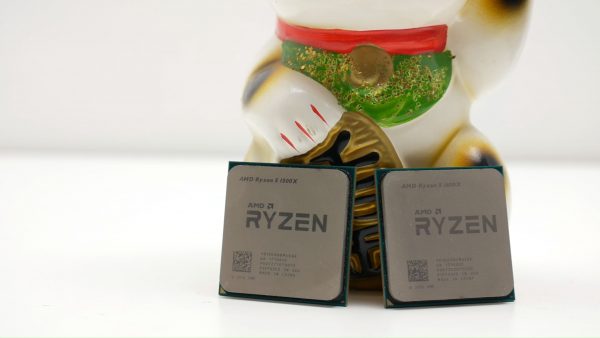 This is the big one, folks. While Ryzen 7 was impressive for bringing competitive eight-core performance to a new price point, too few of us would ever really consider spending £330 plus on a CPU. Instead, it’s the Ryzen 5 processors that are launching today that will be the most tempting for most enthusiasts.

The Ryzen 5 range is aimed squarely at the likes of the Intel Core i5-7600K, which up until now has been the choice of enthusiast level gaming CPU. It has proper quad-core performance, a decently high clock speed and it’s overclockable.

AMD’s response is a quartet of new processors, the Ryzen 5 1600X, 1600, 1500X and 1500. As with the Ryzen 7 range, the X denotes slightly higher overall clock speeds and a slightly higher single-core extended frequency range boost speed. It’s the 1600X that’s meant to take on the 7600K, with the other chips positioned as competitors to the Intel core i5-7400 and even the Core i3-7350K.

But, while those two Intel chips are quad-core without hyperthreading and dual-core with hyperthreading, the Ryzen 5 range are all either quad-core or six-core, and all have SMT – AMD’s equivalent of hyperthreading – unlocked multipliers for, theoretically, easy overclocking. And, unlike the Core i3-7350K, they all have a base and boost frequency.

That all sounds and looks impressive but peer a little closer and it’s clear Intel still has one big advantage, which is clock speed. Intel’s trio of rival overclockable processors, the 7700K, 7600K and 7350K can all hit up to 5GHz when overclocked and even at default speeds they have base or boost frequencies in excess of 4.2GHz. Meanwhile only the Ryzen 5 1600X has a boost speed that even reaches 4Ghz.

As such, when it comes to the 1600X vs the 7600K, Intel will clearly have an advantage in single-threaded applications, which multi-tasking aside is still most day to day activities including games. However, AMD should absolutely run away with multi-thread performance thanks to its two-core advantage and the presence of simultaneous multi-threading.

Also, there’s no other competition for the 1600X at this price as Intel’s cheapest six-core processor costs 50% more and is only available on the LGA2011 platform. As such it should be a shoe-in for those after multi-core performance over single-core.

For the 1500X, though, well it comes up against the slower-clocked and multiplier locked quad-core Intel core i5-7400 and the faster clocked, unlocked, dual-core with hyperthreading Core i3-7350K. That should mean the 1500X beats its quad-core competition in both single and multi-threaded tests, before we even consider overclocking.

Meanwhile the 7350K is clearly going to struggle for multi-threaded performance but will have a clear lead in single threaded tests.
As with the Ryzen 7 processors, the Ryzen 5 ones all fit in the AM4 socket so you’ve a choice of five motherboard chipsets. You can pick up X370 motherboards for around £150-£300 and B350 ones for £80-£100. The only advantage of X370 is SLI and Crossfire support so many will be better off with a B350 board.

That means you can potentially pickup a six-core Ryzen system for just £350, which is fifty quid less than the price of just Intel’s cheapest six-core processor.

But enough preample, let’s take a look at those benchmarks.

Now, I didn’t actually have the opportunity to test the Intel 7400 and 7350K with the exact configuration here so am relying on some slightly older numbers, and I only have those for some of the tests, but the results are still clear enough to draw conclusions.

This pattern is repeated in POVray 3.7 where the extra cores and multithreading of the AMD processors show their might.

In my real world conversion of a video file using Handbrake the gaps close up a little but the AMD chips still take a clear victory.
As for gaming, we see a mixed bag of results as games still mostly prefer clock speed over cores, plus it’s clear some games are just optimised to run better on Intel at the moment. But, any performance advantage is only noticeable at high frame rates anyway.

So, if we look at The Wither 3, which is the least CPU-demanding game I’ve tested, at 1440p and set to ultra detail settings, there’s simply no difference between our test CPUs. Then, even at 1080p with medium detail settings, the frame rate jumps up but there’s still no discernible difference. The GPU is still the bottleneck.

However, with Battlefield 1, this game clearly just prefers Intel processors as even the slower clocked Intel chips have an advantage at low resolutions. However, even that advantage is wiped out when we crank up the detail. Only the Ryzen 7 1700 has a slow enough clock speed to hold it back.

Finally we come to Ashes of the Singularity, which is a very CPU-intensive game. Here we again see that at high detail settings it’s the GPU, not the CPU, that’s the bottleneck. However, at lower resolution and detail settings there’s a proportionally big advantage for the Intel processors. Again this is a combination of better optimisation for Intel and higher clock speeds.

So, it really depends what sort of gamer you are as to whether Ryzen 5 will be for you. For anyone with only a 60Hz monitor, there’s simply no advantage in the faster-clocked Intel chips.

As for power consumption, the Ryzen 5 chips are as frugal as I’ve come to expect of Ryzen overall. AMD really has made huge strides in processor efficiency compared to its previous efforts.

The final consideration is overclocking, and it’s here that the Ryzen 5 chips struggle. Intel may only offer three 7000 series processors that can be overclocked easily but boy do they overclock.

The 1600X, though, I could only get it to overclock to its boost frequency of 4GHz, and AMD doesn’t make any bolds claims about getting much higher. The 1500X does proportionally better, also hitting 4GHz at a push, though I settled on 3.9GHz, which is 200MHz higher than its boost frequency. Both yield modest jumps in performance of 11% for the 1500X and 7% for the 1600X but it’s some way behind the 18% a 7600K will easily do.

So, where does that leave us? Well, if you’re looking for multi-core performance, both the 1600X and 1500X wipe the floor with the equivalently priced processors from Intel, even if you take overclocking into account. It really is a massacre.

So if that’s what’s important to you then go out and buy them. Sure, gaming performance isn’t quite as high but for the most part you’re talking about a difference of 10fps out or 150fps. Game at 60Hz, or even 100Hz and you should be fine.

On the other hand, if you really are after the ultimate gaming CPU to accompany your 240Hz gaming monitor then the 7600K and even the 7350K still have their place, even if they don’t look like particularly great value at current prices. Either way, it’s your move now, Intel.