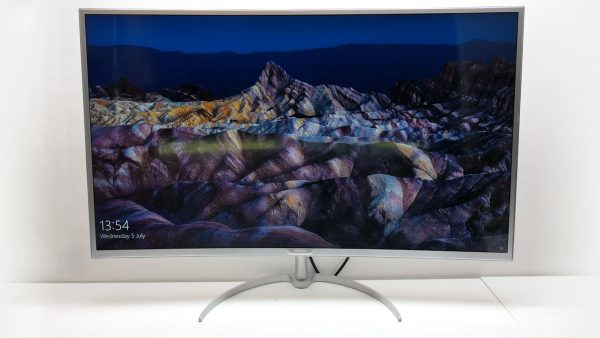 The Philips BDM4037UW is an enormous 40inch, 4K monitor that is to all intents a TV dressed up as a monitor. But, ridiculous as it sounds, it actually kind of works.

For a start, it looks great. The glossy white and silver combination is classy, the solid metal stand is incredibly dainty yet sturdy and the screen itself is impressively slim.

What’s more this colossal display proves surprisingly practical. You don’t get an adjustable stand, other than a bit of tilt, but because the display is so tall anyway, it’s unlikely you’d ever want to make it stand any higher. You also miss out on a VESA mount for using alternative monitor stands, but again considering the size and weight of this display, few mounts would work with it anyway.

Round the back there’s also plenty of connectivity, with two DisplayPort, two HDMI and a VGA input for video as well as a headphone output and auxiliary audio input. Philips has also added a four port USB 3.0 hub. The sockets aren’t all that convenient for plugging in temporary things like USB sticks but you could feed your keyboard and mouse and several other peripherals all through the one connection.

What really makes this display work, though, is that its 4K resolution is a perfect match for its screen size. Its 3840 x 2160 pixels make for a pixel density of 110ppi. That’s exactly the number that I consider the perfect balance of sharp enough for a screen not to appear pixelated but not so sharp that everything appears too small.

4K on smaller screens is great for editing pictures and video but otherwise it can be a slightly messy compromise of having to change the scaling setting in windows to make things readable. Here, you just plug in and away you go.
You just might want to increase your mouse sensitivity so it doesn’t take half an hour to get from one side of the screen to the other.

Meanwhile, if you need to adjust any of the display’s settings, it uses a neat mini joystick navigation system that works well, and the menus are intuitively laid out. On this review sample the joystick has been damaged so it isn’t quite as responsive as it should be but it’s clear that undamaged it would be easy to use.

The only really notable extra feature is the presence of picture by picture and picture in picture modes. The former can take two or four inputs while the latter can deal with two.

The end result is a display that works surprisingly well for day to day productivity. If you like to have loads of desktop space then you get all that without the hassle of multiple displays and bezel correction software.

What’s more, this display’s VA LCD panel delivers mostly very good and at times excellent image quality. It offers largely accurate colours and a staggering contrast level that’s four times what you get on a typical TN or IPS monitor.
Indeed that’s the primary reason why most TVs use VA panels as contrast is so important for adding that punchiness and depth to video. In turn this makes this monitor fantastic for sitting back and enjoying a movie or playing more casual or single player games.

Also helping is that this display is ever so slightly high gamut. That is, its colours look just a touch oversaturated. Not ideal for colour sensitive computer work but again it can bring video to life.

What’s more, this display has incredible uniformity. There’s just a 2.9% average deviation in brightness from the centre to the sides, and of course the curve helps alleviate any issues with viewing angles too.

This being a VA panel viewing angles aren’t quite on par with IPS displays, especially when viewed from above but they’re still far better than any TN panel and shouldn’t be an issue for most users.

So far so good, then, but there are a few potentially critical problems with this display. The first is that its surface is semi-gloss. This is great for further boosting that sense of inky blackness as compared to fully matt finishes. And there’s just enough of an anti-reflective coating to take the edge off, but if you work in a bright environment it could prove too distracting.

The second is that despite its TV-like appearance the display doesn’t have speakers that come close to most decent TVs. They’re weedy and tinny. A touch better than your average monitor, perhaps, but you’ll want something better for sitting back and watching a movie.

Finally, there’s this display’s response time. Philips claims it’s 4ms but, as I’ve tended to find with VA LCD panels, it looks worse than that would suggest. There’s a very distinct smeared trail behind fast moving objects, and changing the overdrive setting does little to improve this. Combined with its basic 60Hz refresh rate and you have a display that is not ideal for gaming. It’s fine for slower-paced stuff but anything that requires quick movement will suffer.

Nonetheless, there’s enough here to make for a potentially ideal display for some users. Available for £600, it’s certainly not cheap but is reasonably priced for such a screen size and resolution.