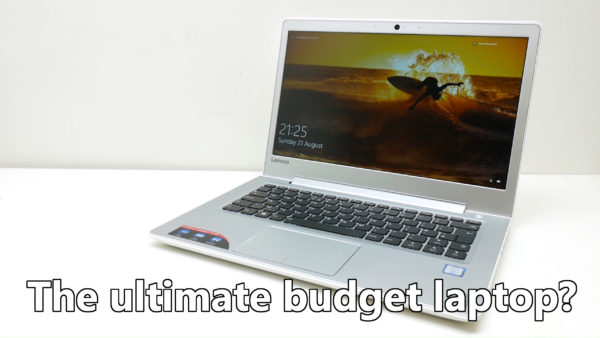 Possibly the ultimate budget 14in laptop

The Lenovo 510S is the sort of device that could easily slip passed somewhat undetected. It’s not a flashy thin and light ultrabook, a super-fast gaming machine or the sort of cheap as chips basic machine you’ll find filling the shelves of PC World.

Plus, it doesn’t help that Lenovo also has a 500S and 510 range just to muddy the waters.

But the fact of the matter is that the 510S is a great laptop that hits a perfect balance of portability, looks, capability and price.

It all starts with a nice design. A fetching pearlescent white outside is joined by a slab of aluminium on the inside and a matching silver surround for the screen. It’s not ultrabook snazzy but it’s vastly superior to many a laptop at this price.

What’s more it’s reasonably slim and light too. Aside from it’s rubber feet that add another couple of millimetres, it’s just 20mm thick and weighs in at 1.7kg.

Being a 14in machine it does have bigger footprint than the smallest of laptops but this is still comfortably the sort of machine you could take just about anywhere with you.

What’s more, because it’s that bit thicker you get more connectivity. You get two USB 3.0 ports, a full-size HDMI and a Ethernet port down the right side plus an SD card reader, a headphone/microphone combi jack and a third USB port – although this one’s only USB 2.0, but does have fast charge.

Like the Lenovo 710S, the 510S has a nice compact power suppler integrated into the plug, so there’s no power brick mid-cable.

Under the hood you get a choice of Intel Core I processors, from the 6100U used here to the very powerful 6567U. This is accompanied by 8GB of RAM and either 128GB SSD or a 256GB SSD. Lenovo also mentions a hard drive option and one with AMD graphics but these don’t appear to be available at the moment.

You of course also get AC WiFi and Bluetooth 4, and what’s more the bottom is easily removable for an simple upgrade to the 2.5in SSD and single stick of RAM.

Obviously performance will vary depending which configuration you go for but even this £449 version has all the speed you’ll need for day to day stuff. Only power users or those that might want to dabble in some gaming need get the more powerful versions.

As for the keyboard, it’s great. It’s spacious and has a perfect layout, with no keys in odd places, plus the key switch action is great, providing plenty of feedback so you know when you’ve hit a key. Add in that it’s fully backlit, with two brightness settings and you can’t ask for too much more.

Sadly the trackpad isn’t quite as good. Just as with the 710S it tracks well and has a nice click but the metal surface just isn’t as smooth gliding as I’d like.

It’s back to the good stuff when it comes to the screen, though. The IPS panel means viewing angles are excellent, plus it produces nice punchy looking colours and has a great contrast ratio of 1200:1.

Maximum brightness could be a touch higher, for those moments where you find yourself having to work in bright sunshine, but in use it feels brighter than its benchmarks would suggest, and the matt finish helps make it more usable thanks to it reduces distracting reflections. The only real stumbling block is its colour space coverage, which is not good enough for those who will be editing pictures and video in any sort of professional capacity.

What’s more the speakers in this thing are great. I mean, great for a smallish laptop, so not exactly earsplitting, but they’re louder and with more mid-range heft than the cheapest laptops.

Even more impressive is this laptop’s battery life. It lasted over 10 hrs in my PowerMark test, which is right up with the best you can get for a Core I laptop – only really much slower Core M laptops get much more.
All of which just leaves the issue of software as a final potential stumbling block. Now I covered most of the controversy in my 710S review so I won’t repeat that here, except to say there is quite a lot of rubbish on preinstalled on here. But it can all be uninstalled, and I don’t feel there’s anything here that should put you off.

As a result, I think this is a truly excellent laptop. The £449.99 version has all the power the vast majority of users should need and has a better screen, keyboard, trackpad, speakers, battery life and build than you’d ever expect at this price.

Meanwhile for those wanting a little more power and a larger SSD, the £599 or £649 versions offer good value too.