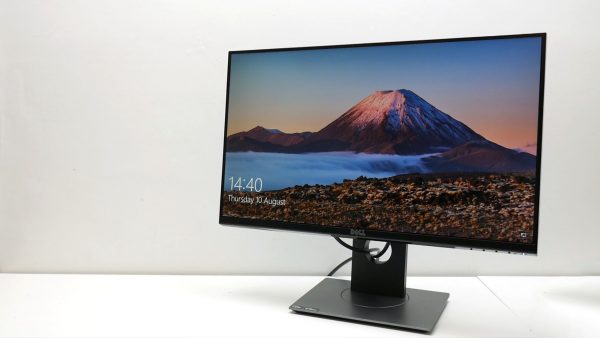 The 24inch Dell S2417DG is the little brother to the 27inch S2716DG, a monitor that largely impressed me except for one key issue with its image quality. Thankfully, the S2417DG isn’t afflicted in the same way, making it a far more tempting option.

Like its sibling, the S2417DG is a TN LCD gaming monitor with a 144Hz refresh rate, 1ms response time and G-Sync. Most notably, though, it also shares the same 2560 x 1440 resolution as its bigger brother, rather than the 1920 x 1080 resolution you get on most 24inch displays.

This immediately elevates this monitor above many others of its size, as it opens up the possibility of gaming at a high resolution, resulting in a sharper image, and when on your desktop it allows you to get more done.

The pixel density of 123 pixels per inch may be a touch too high for some users but it’s only slightly higher than what I consider the ideal level of 110 pixels per inch, which is what you get on a typical 27inch monitor with the same resolution. Meanwhile, I find the 90pixels per inch that you get with normal 1080p 24inch displays to be a little low.

Either way, if you are struggling, you can always use Windows scaling to make things more readable most of the time, just leaving the higher resolution option for when needed.

Zooming back out a bit, though, the first thing that strikes you about this monitor isn’t its resolution but its design. I think there’s a strong argument for saying it’s the best looking gaming monitor you can buy, and certainly the best 24inch model.

Its simple business-like stand and dark grey and black paint job are just so classy, while the hidden bezel gives the whole thing such a sense of sleekness. The only slip up is the glossy plastic on the back, which inevitably will show up fingerprints and dirt more than a matt finish.

As for more practical considerations, the stand offers plenty of adjustability, with height, tilt, pivot and rotation all available. Plus, the stand clips in and out of place really easily and there’s a 100x100mm VESA mount underneath for use with other stands.

Connectivity is also good, for a G-Sync display. The usual limitations apply for video inputs, with just one each of DisplayPort and HDMI but you also get a USB 3.0 hub with two ports on the back and two on the left side, where there’s also a headphone jack.

Sadly, you don’t get any speakers, though.

As for the onscreen display, Dell has done a decent job. The buttons and menus lineup nicely and work together in an intuitive manner. There’s also a good selection of options in the menus, which are balanced nicely between offering plenty of options while not getting too bogged down with superfluous extras.

However, the buttons are a bit unresponsive so there’s still room for improvement.

When it comes to image quality, this display continues to impress. Being a TN panel viewing angles aren’t this display’s strong suit but it’s far from the worst and so long as you don’t go to extreme angles it’s fine.

As for colour reproduction, the use of a proper 8-bit panel, rather than a 6-bit with dithering, has paid dividends as the image is noticeably more stable and accurate. What’s more, right out the box many aspects of its image quality are excellent. Colour balance is just about perfect, there’s none of the overly zealous overdrive settings you get on some monitors and, most crucially, it doesn’t have the washed out look that plagued the S2716DG. Oddly, comparing gamma and contrast figures, there’s no obvious explanation for why the S2417DG looks better but in person that has been my experience.

So decent is this display’s overall image quality, in fact, that I didn’t change a single thing to calibrate it, other than drop the brightness down a bit. This display arrives looking as good as it can.

Meanwhile, moving between 60Hz and 144Hz doesn’t drastically alter image quality, unlike with some displays.
As for gaming, the 1ms response time, 144Hz refresh rate, G-Sync and the extra resolution combine to great effect. It’s sharp, accurate and smooth as silk, and having that extra resolution is a real boon.

In terms of tweaking the panel, the only real choice is whether to turn on the fast overdrive setting. However, it’s not much of a choice as the panel looks great without it and the Fast setting introduces too much corona affect.

In summary, then, this is a really good G-Sync display, in fact arguably it’s the best in its class, which you’d hope considering its £450 asking price. It looks the part, performance is largely very good and it has a great balance of features. The contrast ratio and high price means it isn’t perfect, and as ever the extra cost of G-Sync makes it seem poor value next to Freesync displays, but overall it would definitely be my pick of 24inch G-Sync gaming displays.