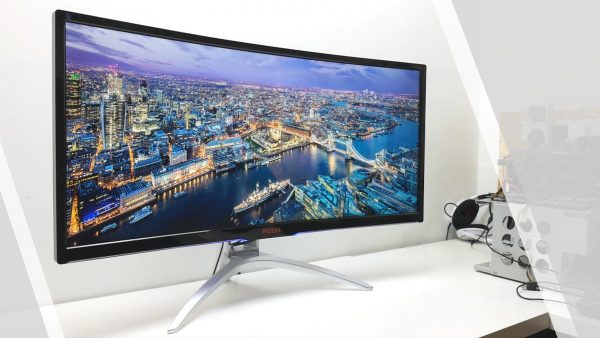 Large, ultra-wide gaming monitors are nothing new but the AOC AGON AG352UCG has a particularly intriguing combination of features. Its curved 35inch screen uses an MVA LCD panel instead of IPS, which allows it to claim a contrast ratio that’s double that of most of its competitors. Plus, it has a proper large monitor resolution. Several 34 and 35inch monitors are only 2560 x 1080 but here you get 3,440 x 1440 pixels, making it much more practical and sharper looking.

What’s more, this display can also refresh at up to 100Hz and includes G-Sync.

It’s quite a combination and as such it demands quite a price too. However, at around £800 or 800 US dollars, it’s noticeably cheaper than its main rival the acer Z35P as well as the similar acer X34 and Asus PG348Q.

So is this the best of the bunch? Let’s take a look.

First things first, AOC has done a decent job with the overall design, though the particularly chunky bezels mean this display lacks the sleekness of the PG348Q and X34.

However, the silver metal stand and rear contrast nicely with the black plastic of the rest of the display, and the curve of the stand in particular is rather fetching. It’s just a shame AOC went with glossy black for the frame. Plus, the rather dull painted on logo cheapens the overall look.

AOC has also added lights to the underside of this monitor. As these things go, they don’t look too bad but they do make the bottom bezel even thicker and would be too distracting for my liking.

Elsewhere, the AG352UCG largely delivers. The stand includes height, rotation and tilt adjustment, and has a chunky handle at the top that makes it easy to move the monitor around.

You miss out on the ability to pivot the display into portrait mode, but this is fair enough on a screen this size. Meanwhile, if you’d rather use your own monitor stand, there’s a set of standard VESA mounting points.

As with all G-Sync displays, connectivity is limited to just two inputs, with one each of DisplayPort and HDMI. But, you also get headphone and microphone ports and there’s a USB hub. Intriguingly AOC has chosen to use a micro USB 3.0 uplink port, rather than a conventional chunky USB version. The cable’s included in the box but it still seems an odd choice.

You also miss out on any USB ports on the side of the monitor, though AOC’s signature flip down headphone holder is present and as useful as ever.

All told, there’s enough here to keep the AG352UCG competitive with its rivals, though nothing to really put it ahead of them.

What’s more, trying to navigate this display’s on screen display drags it behind. On first impression things look good, as AOC has used a single joystick control for navigating it. However, while this works wonders for the Asus PG348Q, here the controls don’t work in an intuitive manner.

That is, once you’re in one of the menu options, adjusting it is always done by pushing the joystick forward or back, i.e. up and down, even if the option on screen seems to indicate that you should move left and right. You sort of get the hang of it, but it never quite feels like second nature.

At least the menus themselves offer an ample selection of options, and moreover, it’s not like you need to change much anyway. Adjust the brightness to your liking and you can pretty much use this monitor as is.

That’s because nearly every image quality criteria of this display is near perfect right out of the box.

You can make things even better by switching from the Warm colour preset to the User colour option and adjusting the RGB values. However, the difference is small enough that most users shouldn’t worry about it, especially as you’d need a colorimeter to keep a track of what you’re doing anyway.

Aside from colour accuracy, this display’s piece de resistance is its contrast. Because VA LCD panels can inherently produce deeper black levels than IPS or TN panels, you get a much better contrast figure. This gives a real richness and depth to the image which makes this display particularly good for sitting back and watching video.

I say sitting back, because that is the one slight downside with VA panels, which is that their viewing angles aren’t quite as good as IPS. As such you do tend to get a noticeable difference in black level from the top to the bottom of the screen when sat at a normal viewing distance of around 50cm. Move back to around a metre away and this is greatly reduced, though, and in fact on this monitor this effect is less noticeable than some other VA displays I’ve seen.

When it comes to gaming, we come up against the other disadvantage with VA displays, which is a slow response time. AOC claims 4ms for this display, which is the same as rival IPS screens, however there’s still noticeably more ghosting compared to those models.

This can be slightly improved by adjusting the Overdrive setting but overall it’s still not quite as crisp. Incidentally, unlike some displays, cranking the refresh rate up from 60Hz to 100Hz doesn’t significantly affect image quality.

Despite the slower response time, this monitor still offers a good gaming experience, though. The bump up to 100Hz does help it feel more responsive than 60Hz displays and G-Sync works perfectly for smoothing out tearing and stutter.

So, all told, this display has impressed me more than I expected. Previous faster refresh rate gaming monitors with VA panels have tended to disappoint because of their response time issues, unless they use strobing backlight like the Samsung CHG90. But the AG352UCG is snappy enough to feel like a noticeable upgrade over 60Hz displays.

Add in the fantastic overall image quality, decent feature set and slightly cheaper price than its rivals, and it really has a lot going for it.

Given the choice I would probably still go with the Acer X34 or Asus PG348Q thanks to slightly better gaming performance, more consistent viewing angles and the slimmer bezels, but if high contrast is more important to you, then the AG352UCG is a great option.