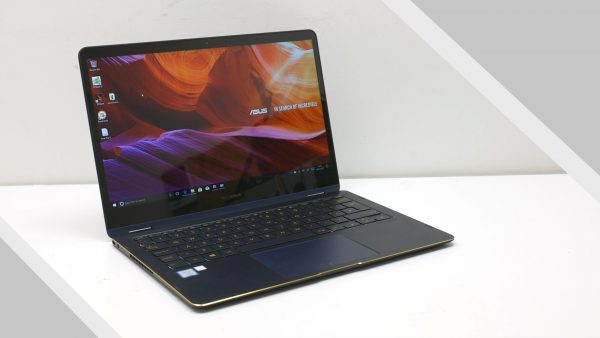 The finest touchscreen laptop yet

The Asus Flip S (UX370UA) is the company’s new flagship convertible touchscreen laptop. It’s thin, light and built from premium materials, just as you’d expect of a more conventional high-end laptop, but unlike those machines, here the screen also responds to touch and flips round so you can use it as a tablet or put it in various other useful positions.

It also comes with a stylus for accurate drawing and note taking and inside is a 512GB SSD and an Intel Core i7 processor.
All told, it has plenty of potential to be the ultimate 2-in-1 device. So lets’ see if it delivers.

First things first, Asus has absolutely nailed the design. On paper the choice of gold and navy blue is a slightly odd one but it actually works well. It’s something a little different without feeling garish or like it’s trying to be different just for the sake of it. There is supposed to be a more conventional dark grey version too thought I’ve not seen it for sale anywhere.

Overall build quality is also fantastic. The outside is all aluminium and its finished in a wonderfully smooth texture.

Sometimes aluminium laptops can feel a bit rough or have sharp edges. There’s none of that here, though.

Moreover, the metal isn’t just for looks. There’s a rigidity to the whole thing that many cheaper aluminium clad laptops can’t match.

This is all the more impressive considering how thin this laptop is. It’s  just 10.9mm thick and weighs just 1.1kg. for a convertible 13inch laptop with a glass screen, that’s seriously impressive.

The all-important hinge is excellent too, with the screen staying securely in place at any angle. It’s also not too top heavy so the laptop doesn’t tend tip backwards like it does with some 2-in-1 devices.

On the underside it’s also nice to see there’s a minimum of unsightly ventilation and speaker grilles, so the whole system looks and feels great from any angle. At the front are the speakers while these two grilles are the air intakes. Hot air from the cooling system is blown out the side.

The speakers sound surprisingly good too, with plenty of detail, volume and an expansive sound stage.

It’s no surprise, however, that a few compromises have had to be made to make such a slim and light machine. Most obviously, connectivity is limited to just a headphone jack and two USB Type-C ports. One of the Type-C ports is also used to charge the device so will often be occupied.

It’s a good thing, then that Asus includes a dongle to expand upon this connectivity. It provides one USB A, one USB C and one HDMI port, which is a useful selection, though it’s a shame Asus couldn’t have also squeezed in an SD card reader.

Next to one of the USB Type C ports on the right edge is a slim fingerprint reader. This works surprisingly well considering how small it is. The only issue being that if the laptop’s on a flat surface it can be a little awkward to get enough of your finger in contact with the reader.

In front of this is a volume rocker switch and the power button. It’s quite common to have these on the side of hybrid laptop/tablet devices and sometimes they can be difficult to press or tell apart, but here it became a natural and effortless motion to just slide your finger along the edge and feel for the buttons.

Moving onto the screen, this laptop is available with two versions. Both are IPS LCD panels but one has a 1080p resolution and the other is 4K. This is the 1080p version and it’s very good but not perfect. Contrast, gamma, maximum brightness and fine colour accuracy are all very good, and the IPS LCD technology means it looks great from any angle. However, it does arrive with a colour temperature that’s too high, which gives the image a slightly blue cast to it. Most users won’t notice but professional image and video editors will want to calibrate this display.

The other slight issue is the resolution. Ordinarily 1080p on a 13inch laptop is plenty. However, flip the laptop into tablet mode and you realise just why it is that even 5inch phones have higher resolutions than this laptop. There’s something about the way you hold and interact with these devices that the pixels become more noticeable.

I’ve not found the 4k version available to buy anywhere yet but if the price isn’t too high I’d be tempted to take the upgrade.

As for the keyboard and trackpad, though, they’re both all but faultless. The keyboard has a great layout and a generally spacious feel so that typing doesn’t feel cramped. The key action is also excellent, with a crisp, defined but lightweight click that means you always know if you’ve hit a key properly.

The trackpad, meanwhile, is nice and large so it’s easy to move the cursor across the whole screen in one go. Plus, the tracking surface is smooth and responsive, and it’s very rigid so the single button click responds evenly across the whole thing.

The Flip S doesn’t slip up when it comes to performance either. Its Intel Core i7-7500U processor powers through everyday workloads and is ample for even things like basic video editing.

Its ably supported by 8GB of RAM and a large 512GB SSD. The SSD isn’t the fastest you can get but it’s plenty for most everyday stuff.

The intel processor’s internal graphics will also turn its hand to some basic gaming. You’ll be very limited in what detail levels and resolution you can run at, but many less demanding games will be just about playable.

So far so good, then, but there are a couple of key problems with the Flip S.

The first is that it simply doesn’t have a long enough battery life. Asus claims up to ten hours but in reality you’re looking at around six. That could still be enough for some people but if you’re after a device that’ll last a full working day or a long haul flight then the Flip S isn’t good enough. In contrast, several rival conventional laptops of this size can easily last for ten hours or more.

The other issue is that despite Asus’ best efforts, this still doesn’t really convince as a touchscreen device. It’s too big and heavy to use as you would an iPad, and instead is only really manageable when laid flat either on a table or on your lap.
The various other configurations you can use are useful but not necessarily enough on their own that you’d want to choose this laptop over a more conventional one.

Not helping, of course, is that Windows still doesn’t feel like a particularly good tablet interface. It’s continually getting better, and with the right apps it can get a little closer to a true tablet feel, but it’s still not there yet.

On the other hand, the Asus Pen provides a nice way to accurately interact with the touchscreen. It’s not a class-leading drawing device but its 1000 levels of pressure sensitivity do go some way to providing that true-to-life feel.

Overall then, there’s still a lot to like about the Flip S. As a laptop it’s up there with the very best, with only it’s battery life and connectivity holding it back a little. Meanwhile the versatility of the rotating touchscreen is a big plus and the tablet mode can be useful too. Add in that you get the Asus Pen and a dongle included and it starts to look like reasonable value too.

The merits of these convertible touchscreen laptops may still be up for debate but what isn’t is that this is one of the finest you can buy.