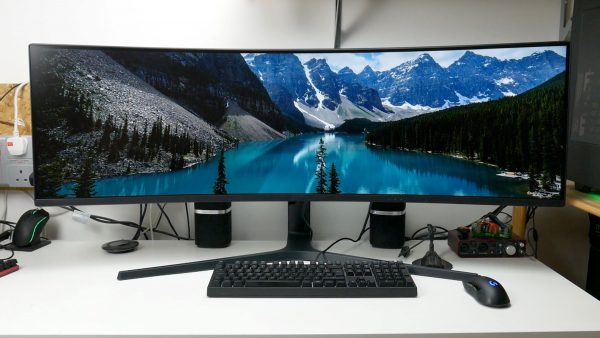 Samsung’s first attempt at a super wide monitor, the CHG90, was a bit hit and miss. Its huge 49inch screen size and gaming performance were impressive but its HDR was underwhelming and its price a bit high.

Now Samsung’s back with the C49J89 and it looks to fix both of those problems. HDR has been ditched completely and the price has dropped too. What’s more, Samsung has added in one really useful feature, which is a KVM switch.

This means you can use this huge screen along with one keyboard and mouse to fully control two PCs at the same time.

You can either switch between them in fullscreen mode or use the picture by picture and picture in picture modes to view both inputs at the same time then just switch controls when you need.

This instantly transforms the overall usefulness of a really large screen like this.

The KVM switch works reliably as well, which is far from a given from my experience with other KVMs.

There is one fairly major caveat, though, which is that some advanced features on keyboards and possibly mice too, may not work. I found the backlighting on my keyboard didn’t work consistently and nor did any of its extra function keys.

That’s fine if you’re happy to use a more generic keyboard but if you’ve already invested in a high-end model then this monitor may not be for you, or at least its KVM functionality won’t be.

Elsewhere the C49J89 is almost identical to the CHG90, so you’ve got the same massive 49inch screen that’s equivalent in size to two 27inch monitors sat side-by-side.

This display is also curved and framed by a fetching low-profile bezel. Indeed, for such a huge display it looks quite fetching.

However, that curve along with the sheer width of this display means you really do need to think about if your desk has room for this monitor, especially as its stand sticks so far forward. On this standard ikea desk, the feet come so far forward that they get in the way of my mouse.

As for round the back, you’ll find a plentiful selection of inputs and outputs. You get one DisplayPort 1.2, one HDMI 2.0 and two USB Type-C inputs all of which can be used as video inputs. There’s also a further USB Type-C port, one USB 3.0 and two USB 2.0 ports that you can use to connect peripherals.

It can get a little confusing to work out which inputs you need to use to get the KVM functionality working but once you get the hang of its you end up with loads of possible combinations, which is great.

Less great is that the ports are incredibly awkward to reach unless you’re able to fully spin the display round or stand behind it.

Part of the reason for this is that despite the screen’s stand offering height, rotation and tilt adjustment, it simply can’t turn far enough in any direction for you to see those ports.

Nonetheless, for such a large display it’s to even get that much adjustability. The stand can also be removed and a 100x100mm compatible monitor mount used instead.

Getting back to the display itself, perhaps its most notable feature is its relatively low resolution, considering the size of the panel. It’s only 3840 x 1080 pixels, which makes for a fairly blocky-looking pixel density of 80ppi.

Sit a normal 50cm or so from the display and it doesn’t look great, but set the screen back to around 70cm away, and it looks much better. This will also allow you to more easily take in the whole display at once.

The screen’s LCD panel is of the VA-type so it boasts impressive contrast of 3000:1, making for a deep, rich-looking image. Colour accuracy is also very good. You miss out on the extended HDR colour range of the CHG90 but you still get 90% sRGB coverage and very good out of the box colour balance and gamma.

This wouldn’t be our first choice for truly critical image and video editing but it’s good enough for more casual use and looks great for watching videos and playing games.

Speaking of which, the panel can refresh at up to 144Hz and has a 4ms response time, which makes for a decent gaming experience. It’s not the very most responsive display out there but it’s still plenty fast enough that you’ll notice the upgrade over standard 60Hz monitors.

You do, however, miss out on the Freesync and backlight strobing of the CHG90 so that display is better overall for gaming.

Overall, then, the C49J89 is certainly not going to be the first choice display for the majority of monitor buyers but for certain users it could be ideal. For instance, the KVM, picture-by-picture functionality is an absolute godsend for what I do, where I may be writing on one computer while testing another.

That I can then drop in and play some games to a reasonably competitive level or sit back and watch a massive widescreen video, makes it quite the all-rounder.

At £850-£900 it’s certainly not a standout bargain but if its combination of multi-computer productivity and gaming suits your needs, it’s well worth a look.