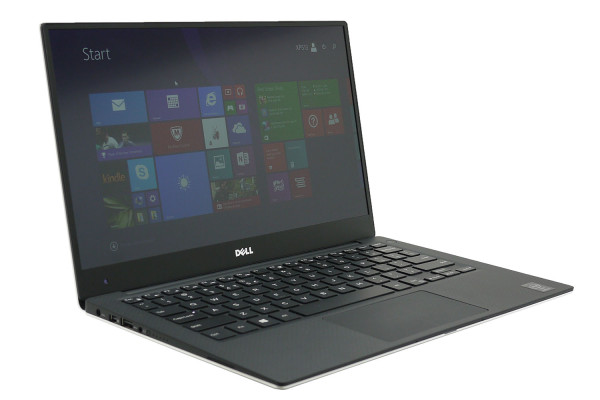 It has taken long enough but finally one of Apple’s competitors has built a machine that can wrestle the “best ultrabook” crown from the MacBook Air. The 2015 version of the Dell XPS 13 is smaller, lighter and has a vastly superior screen than the Air and it even undercuts it on price – the most crucial factor that every competitor has so far got wrong.

The XPS 13 kicks things off with a stunning design. It’s machined aluminium exterior gives off the same sense of quality as the Air and even though the interior is finished in plastic, it has a soft-touch finish that looks and feels great. It’s a lighter machine too, coming in at 1.27kg, compared to 1.35kg for the Air.

What’s most striking, though, is the footprint of this machine. It’s only the same size as a typical 12in machine so is some 40mm narrower and 30mm less deep.

This is all thanks to the signature feature of this machine, which are the incredibly slim bezels round the screen. The effect is quite striking – instantly making all other machines look chunky in comparison – and has practical benefits too as you get the same screen size but in a smaller package.

The only downside is that the webcam has had to be moved from its normal position above the screen to the bottom left corner. It’s not quite as convenient but still works fine for most things.

In fact it’s sharp enough that you’ll probably want to zoom in a bit using Windows’ scaling tool, so that things are a readable size, though you could just about get away with using it at its native resolution.

Moreover, the screen quality is exceptional. The matt finish – this isn’t a touchscreen – means reflections are non-existent, while a contrast score of 1505:1 is the best we’ve measured for this class of laptop and means there’s a real vividness to the image.

Maximum brightness is actually little low at just 205nits but we’ve yet to find a situation where it’s proved to be a problem.

We also measure the out of the box colour temperature at 6497K, which is almost exactly the 6500K we like to see.

Colour coverage isn’t all that special (90% sRGB) and nor is the Delta E (3.14) but they’re still better than many competitors and are still fine for more casual use in colour accurate work.

Elsewhere the Dell XPS 13 is more typical, with an Intel Core i7-5500U processor (an ultra-low voltage Broadwell processor with HD Graphics 5500), a 128GB SSD (m.2 format and upgradeable) and 8GB of RAM.

Round the sides you’ll find two USB 3.0 ports, a mini DisplayPort, and headphone jack, along with a battery indicator (a nice touch  but somewhat redundant when laptops boot up so fast these days). Inside there’s also 802.11ac WiFi and Bluetooth 4.0.

It’s nothing to shout about as a spec list but the upgradeable SSD is always nice and the DisplayPort is more convenient than needing an adapter as you do on a MacBook Air.

The only thing that really lets this laptop down a touch is its keyboard. While the screen is no smaller than normal 13in ultrabooks, the keyboard is. This slight reduction in key size and space makes it a little more awkward to type on for regular users of larger keyboards but is certainly something you can get used to.

Even more irksome is that the keyboard has a US layout so lacks a £ symbol and some of the keys are slightly differently arranged to a normal UK one. The vast majority of users will get by but it is a bit annoying.

The Dell XPS 13 isn’t going to win any performance awards but it delivers the sort of experience you’d expect of an ultrabook. Its SSD makes loading and bootup nippy while the processor powers through most tasks, and even a bit of gaming, quite easily. Really start to tax it though and it will struggle.

Under our tests it delivered a score of 258 in Cinebench R15, which is a little behind the 278 of the Toshiba Kira, and likewise in 3D Mark Ice Storm it scored 46,290 to the Kira’s 52,631. Both are the sort of scores that can be double with a move up to a large, more powerful laptop with a dedicated graphics card.

But where ultrabooks really show their worth is in battery life, and here the XPS 13 excels, beating all but the MacBook Air in our PowerMark test. It achieved 10 hours and 57 minutes while the MacBook will push a bit closer to 12 hours, but in contrast most ultrabooks – including the Kira – struggle to hit 10.

For such a slim and light machine it’s quite incredible.

Other things to consider

Sound quality from the onboard speakers is as middling as you’d expect for such a small machine but will do for watching video clips and Skyping, plus it’s no worse than any other ultrabook.

The software that comes pre-installed is also pretty good. You get very little in the way of unknown, completely useless bloatware like with the Toshiba, though Dell’s own service software is a bit aggressive.

Perhaps the biggest problem right now with the XPS 13 is that the once devistatingly tempting price of £799 that Dell had slapped on it has been and gone. In fact, here in the UK, less than 9 months after launch (and only six months after widespread availability) you can’t get the lower-spec model at all anymore. Instead the only model listed if the £1,199 version with a ridiculous 3,200 x 1,800 resolution touchscreen and 256GB SSD. We’re sure it’s quite nice but it’s not the same compelling proposition that the lower-spec model was.

We really hope Dell makes more of the XPS 13 in the lower-spec before it refreshes the lineup, as that probably won’t arrive for another six months.

If you can find the Dell XPS 13 for its original £799 price anywhere then grab one – it’s simply the best slim and light laptop you can buy right now. Otherwise we can’t say for certain if the higher-spec £1199 version is worth the money until we review it.

Battery Life – Up to 15 hours of battery life
Ports –