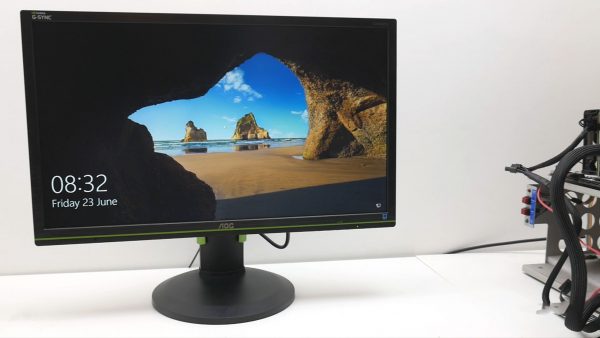 The cheapest G-Sync monitor you can buy

The AOC G2460PG is far from the newest monitor on the market, but it is just about the cheapest G-Sync monitor you can buy right now.

Of course, cheapness is all relative, especially when it comes to G-Sync, and this is still a £350 pound or $350 monitor, but that’s still £20 cheaper than its nearest competitor and some way below most others. So, relatively cheap it may be, but is it also cheerful?

Well, in terms of design, it’s not great. The green stripe and faux brushed metal effect don’t really work and you miss out on a low-profile bezel.

It’s far from the ugliest monitor I’ve seen, and you won’t find better at this price, but the fact remains this is a monitor you’re likely to buy for its performance and features only, and not its desk appeal.

Otherwise you want for little. For a start, the stand offers height, tilt, pivot and rotation adjustment. The base only swivels on a spinning plastic disc, rather than having a proper joint, but at least the facility is there. Also, the stand can be removed and replaced with any other that has with a 100x100mm VESA mount.

You also get a USB 3.0 hub with a couple of ports on the back and two on the side, one of which offers standby power so you can charge your devices while the screen is off.

As far as video inputs, though, you only get one DisplayPort. While this was common on early G-Sync displays, several modern ones now offer an additional HDMI input, opening up the possibility of plugging in a games console or TV box to your monitor.

You also miss out on speakers or a headphone output.

As such, this monitor really is all about the core features of its LCD panel, and quite a few there are. The 24-inch, TN, 1080p panel can refresh at up to 144Hz, it has a 1ms response time and as well as G-Sync you can also uses Nvidia’s backlight strobing ultra low motion blur technology.

Like other displays with this feature, it can only be turned on when G-Sync is off but it’s a great extra that enables you to get an even sharper looking image that’s ideal for competitive FPS games in particular.

Indeed, the gaming performance of this display in general is very good. G-Sync works perfectly, providing that smooth clear image that’s just so much more satisfying to view than without any form of vertical sync.

The response time and 144Hz refresh rate also combine to great affect, and by dialling in the comprehensive Overdrive control you can get just the right balance between reduced blur and minimal corona affect.

For the most part overall image quality isn’t bad either. You get the usual iffy viewing angles of a TN panel but otherwise it’s okay. However, it takes a bit of tweaking to get the best from it.

Out the box, contrast and gamma are too low, making the image appear a bit grey and washed out. However, by upping the contrast setting and switching to the gamma3 setting things are pulled into better shape.

Contrast is still a touch low but enough to get by especially if competitive gaming is your main concern.

It’s just a shame the onscreen display that you’ll need to dive into to adjust those settings is quite so clunky. The indented labels for the buttons are almost impossible to see and for some reason the left and right buttons correspond to down and up.

Overall, though, this is a perfectly decent gaming display. As ever, the main concern would simply be the premium of paying for G-Sync in the first place. You can pick up 144Hz, 1ms displays with Freesync for under £250 so in that regard this display struggles to feel like a true bargain.

Nonetheless, if you must have G-Sync but your budget’s tight then you won’t go far wrong with this display. AOC G2460PG