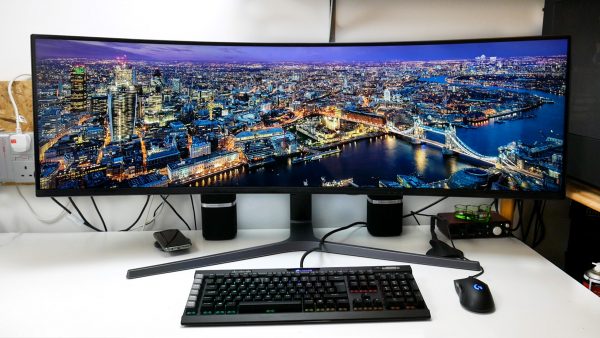 Is this huge 49inch monitor the ultimate gaming display?

Superwide monitors are nothing new but most have a paltry 34inch diagonal and measly 21:9 aspect ratio. Enter the Samsung CHG90. This behemoth of a monitor is 49inches from corner to corner and has a massive 32:9 aspect ratio. That’s the same size as two 27inch monitors sat side by side.

This gargantuan screen also packs in all of Samsung’s latest display technology too. So you’ve got HDR compatibility, a 144Hz refresh rate, a 1ms motion picture response time thanks to backlight strobing and it has Freesync support. On the surface it seems like it should be the ultimate superwide monitor, but not all is quite as it seems.

First things first, though, this display looks great. The elegantly curved panel, dainty-looking stand and hidden bezel give it a lightness that belies its sheer size. The black and gun metal plastics and strip of metal round the edge all work well together too. It’s not garish but neither is it too business like.

The only slight slip up is that there’s a rather obvious gap in the bezel that just takes the edge off its premium feel.
Still, this is a monitor that most people would gladly have adorning their desk. Assuming of course they’re desk is big enough…

Measuring nearly four feet wide and weighing in at 15kg, it it technically smaller than two 27inch monitors but not by much. Even just the base of the stand is wider than most monitors. Though notably, because it uses a conventional height adjustment, the whole thing doesn’t stick out as far as the CHG70 with it’s pivoting arm adjustment.

The display can also be rotated and tilted though understandably pivoting isn’t an option.

As you’d expect of such a large monitor, it has an internal power supply so there’s no external power brick to worry about, plus there’s a cover for all the rear IO. This makes for a tidy cabling setup but makes accessing the ports inconvenient.

In fact, due to the size of this display and the positioning of the ports, even with the cover removed it can be quite a pain to plug things in.

The selection of ports is impressive, though. You get a full-size DisplayPort 1.4, a mini DisplayPort 1.4 and two HDMI 2.0 ports, plus there’s a two-port USB 3.0 hub. You can also use two inputs at the same time with the PBP mode, so you can play console games or watch a Blu-ray while you work.

Above the ports is the same ring of light as on the CHG70. This provides a nice subtle blue glow that adds a little bit of visual flair to the overall design. It can of course be turned off or the brightness enhanced by removing the decorative ring that partially covers it. Doing so also reveals the screws for attaching the VESA wall mounting point.

One other little extra is a headphone holder that flips down from the back of the stand. This is very much a token extra, though, as it’s a bit awkward to open and close and isn’t all that conveniently positioned.

The CHG90 has the same menu control system as the CHG70, except the main joystick that’s used to navigate is now on the underside rather than the back. It still works just as well, though, making for quick and intuitive navigation of the equally good menus.
Tap it and you can quickly access the input selection, eyesaver mode and power option or enter the main menu.

Inside this you get a comprehensive selection of colour adjustments and gaming options that ensure you should be able to get things setup just as you like. The only significant thing to note is that this display doesn’t have a conventional overdrive setting.

Alongside the joystick are three preset buttons. These allow you to store and recall several key settings so that at the touch of a button you can switch between a desktop mode, where backlight strobing is turned off, brightness is dimmed, etc. Then you can have a setting optimised for Freesync gaming and one for competitive gaming with backlight strobing.

Also note the strobing option disables brightness adjustment and alters the colour. I found I had to make quite severe adjustments to the RGB values to get it back to my preferred colour balance. But, this is more of an academic observation as during competitive gaming I didn’t particularly notice or care and I would disable the strobing for any other use.

Speaking of all this gaming stuff, we might as well dive right in to how this display performs.

For a start, the native response time of the VA LCD panel is not too bad. It’s certainly not up there with TN gaming displays but is a huge improvement over previous VA gaming displays I’ve used. Unlike the likes of the AOC C3583FQ, this actually feels like a proper gaming display, even without backlight strobing.

Other areas where it excels include input lag, which is very low, and Freesync also works perfectly, with the framerate range extending all the way from 48Hz up to 144Hz.

The backlight strobing is great too. It successfully masks the slightly slower response time of the panel, making for a sharp and responsive feel that also reduces eye-tracking motion blur. There is some inconsistency in terms of crosstalk from the top to the bottom of the panel, but overall the feature still works well.

As for gaming compatibility with the ultrawide aspect ratio, but the vast majority of modern games do support it. There are two things to note, though. One, most FPS won’t allow for a wider field of view but instead stretch the edges of the image, so there’s not necessarily an advantage to be gained. Also, the 32:9 aspect ratio is wider than most movies so you’re still getting black bars most of the time, but to the sides rather than above and below.

Moving onto general image quality, this display mostly excels. The VA panel provides good overall viewing angles that far surpass any TN display, though can’t quite compete with IPS for vertical movement. It also provides a whopping 2800:1 native contrast ratio, which really brings a depth and vibrancy to the image.

Samsung also calibrates every monitor before it leaves the factory, and sure enough it arrives looking very close to perfect. To get the best from it I did alter the colour balance slightly but this display still far surpasses the vast majority of other gaming monitors for out of the box image quality.

The only cause for concern is the slightly extended colour gamut, which sees this display covering 125% of the sRGB colour space. As a result colours can sometimes look a little oversaturated but it’s largely only something to worry about if you’re working in professional image manipulation.

Now, to a certain extent the sheer size of the CHG90 alleviates this as you may want to sit a little further back from it anyway. Plus, if the resolution were higher you’d have to use two video connections, making things more complicated. But the point remains, that despite appearances, this isn’t a more efficient way of getting the equivalent of two 27inch monitors on your desk.

All of which brings us to HDR, and there’s a reason I’ve left it til last. Samsung’s whole approach with its HDR claims for this monitor and the CHG70 is that it can cover the required extended colour gamut thanks to its quantum dot backlight filtering and it can deliver some of the maximum brightness and contrast benefits of HDR thanks to the native contrast of the display and a degree of local backlight dimming.

And, to an extent this works. With a measured native contrast of 2800:1, it provides nearly three times the level of contrast you’ll get on any IPS or TN panel.

The trouble is, it’s still a long way off the 20,000:1 that the HDR10 standard aims for and the local dimming that Samsung has include does next nothing to help out. There are just eight backlight zones, which means that just the tiny cluster of pixels needed to illuminate a cursor results in a huge portion of the screen being brighter. In comparison, Acer and Asus’ upcoming full array local diming LCDs have 384 zones, and they’re only 27inch monitors.

The end result is that you do get a vague impression of what HDR can do, but it’s not really a major selling point.

In conclusion, then, this is still a great monitor. For a gaming display its image quality is fantastic right out of the box and the sheer size and spectacle of it is fun in and of itself. Add in a nice design and plenty of features and it goes a long long way to justifying its £1300 asking price.

In particular, those with two 1080p monitors will find it a nice upgrade.

However, if you’re already rocking two 27inch displays then you may find the downgrade in resolution to be too much and it’s a shame the HDR isn’t more compelling.