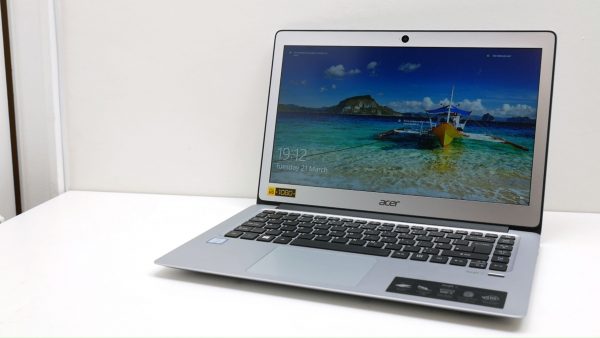 The Acer Swift 3 is the entry level option in the company’s lineup of thin and light laptops, coming in behind the Swift 7 and Swift 5. Starting at just £500, with this model I’m reviewing available for £650, it’s around half the price of more premium competitors.

Yet, the Swift 3 still has an all-aluminium body, an IPS screen and decent overall specs. So what’s the catch? Well, there isn’t one, so far as I can tell.

Ok, so one thing it certainly can’t claim is to be the smallest or lightest laptop out there. It’s a consistent 18mm thick and the bezel round the screen is fairly large by modern standards. Given it already uses 14in rather than 13in screen and the result is a machine with a markedly larger footprint than the likes of the Dell XPS 13.

Still, weighing in at only 1.5kg, it’s 200g lighter than its main competitor the Lenovo 510S and is still plenty small and light enough that you could easily carry it around with you all the time.

What’s more that metal exterior really does look good. Sure, there’s not quite the fit or finish of £1000 alternatives but for the money its impressive. And there’s a gold option too, if that’s your thing.

However, note this isn’t a unibody type of construction where the panels are milled from solids chunks of metal like with a macbook. As such you don’t get the same rigidity and sense of longevity that you do with the best built machines. In particular the keyboard area flexes noticeably, though the screen is surprisingly sturdy and it is has a fold flat hinge.

An advantage of this being larger than true ultrabooks is that you’ve got space for plenty of connectivity. You get one each of USB 2.0, 3.0 and Type-C, as well as an HDMI, SD card reader and headphone/microphone combi jack. The Lenovo 510S has more USB 3.0 ports and includes an Ethernet adapter but doesn’t have USB Type-C, so it depends what your needs are as to which is the better option.

As for the screen, it’s a Full HD panel so your penny pinching doesn’t mean a loss of pixels. The IPS LCD tech also makes for great viewing angles and the matt coating keeps reflections at bay. So far, so good.

Initial impressions of overall image quality are decent too. Colours look reasonably accurate and a nice dark black level makes for an impressive contrast ratio of 1360:1. However, maximum brightness is a touch low, at 243nits. The 510S is only 30 nits higher but ideally we’d like to see both reach closer to 300 so they’re better equipped for use in bright sunshine.

Both of these laptops also have fairly poor sRGB colour space coverage. This gives the displays a slightly muted look, almost like opting for the movie mode on a TV. That still makes it fine for general use but means it’s unsuitable for professionals working with pictures and video.

As for the keyboard, it’s largely very good. This UK version gets a proper UK set of keys and the overall layout is spacious and easy to get along with. I’d rather the awkwardly positioned Home/End/Pgup and Pgdn keys were secondary functions of the cursor keys but otherwise it’s great.

Likewise the key action is light but responsive and although the base does flex while typing, I didn’t find it bad enough to be a problem.

It’s more good news when it comes to the trackpad. It’s nothing special but the aluminium surface is nice and smooth, tracking is reasonably accurate and although the click action is a bit stiff it’s still easy to use. I’ve certainly encountered worse on more expensive machines.

Inside, you get the choice of several Intel processors, starting with the Core i3-7100U going up to the Core i7-7500U, while RAM is either 4GB or 8GB and the SSD is either 128GB or 256GB. The entry level option that’s currently discounted to £450 is exceedingly good value, even if it will lack a bit of performance. But, for most people, it’s this £650 configuration I’m reviewing that is probably the best bet. You get a plenty fast enough CPU plus the 8GB of RAM and 256GB SSD of the most expensive options.

Alternatively, if you’re tempted by the cheapest option but want a bigger SSD, it’s an easy upgrade.

The configuration here delivers exactly the sort of performance you’d expect, which is to say it’s essentially the same experience as £1000 ultrabooks such as the Dell XPS 13.

The combination of the ample processor and nippy SSD means general day to day tasks fly by. Only those seeking true gaming performance or heavy lifting such as video encoding will need much more.

All this and battery life is decent if not class leading. I measured 7hours and 24minutes with PowerMark, while the Lenovo 510S managed over 10 hours. However, watching an hour of Netflix and the Acer dropped only 10% battery, suggesting the company’s claim of 10 hours battery life isn’t far off. Also, that’s comparing to last year’s 510S with it’s most basic CPU option so it’s likely things would be a bit closer with like for like specs.

In the end, this is without doubt an absolute bargain of a laptop. This £650 model offers essentially the same core experience as something like a Dell XPS 13 for half the price while the £450 version will be a little slower but still ample for many users.

Lined up against it’s most direct competitor, the Lenovo 510S, the Swift 3 has the slimmer, lighter, better looking chassis and Type-C USB, while the Lenovo has a slightly better screen and battery life and includes an Ethernet port.

So it somewhat depends where your priorities lie but I feel the Acer just takes the crown.